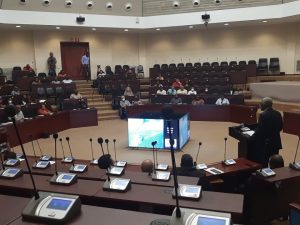 In the wake of the death of two tourists in Guyana’s interior within the past two months, Guyana’s tourism industry stakeholders have laid the groundwork for stringent safety and security rules which could eventually become laws or regulations, officials said.

Director of the Guyana Tourism Authority (GTA), Kamrul Baksh suggested that recent separate deaths occurred because of a breach of the rules. “We have had two very unfortunate incidents within the industry; incidents I believe could have been avoided had the right protocols been followed,” he said.

Guyana-born American Gladstone Haynes disappeared in October, 2022 while on a visit to Orinduik Falls, and earlier November American Thomas Carstens drowned after the boat capsized in the Upper Essequibo River, North Rupununi.

According to Mr Baksh, going forward, the “risk ultimately will be borne by the guides” as far as the safety of travel groups are concerned.

The GTA Director said there was need for proper sight-planning  especially for those like Orinduik where there are several stakeholders involved.

Director-General of the Guyana Civil Aviation Authority (GCAA), Retired Lt Col. Egbert Field made it clear that for aviation tours, it is the carriers that are responsible for the tourists. “I want it to be known that it is generally understood that the aircraft operator is responsible for that tourist from the time he joins that aircraft to the time he disembarks that aircraft and leaves that airport safely,” he said. Mr Field said consultations must be held with aircraft operators in an effort to maintain safety in the industry, saying they are now part of the tourism industry that transports tourists to interior locations. He said the aircraft operator and the tourism operator must have tour guides, in addition to the aircraft operator being in possession of safety procedures for embarking and disembarking aircraft, passengers are properly briefed, issued with safety cards, coping with fire aboard, and well-versed with the terrain. He said tour guides should be properly trained in aircraft safety protocols and emergency procedures.

Tourism Minister Oneidge Walrond told a recent tourism stakeholders consultation that was organised by the Guyana Tourism Authority (GTA) that efforts were being made to tighten the regulatory framework more so because of the expected influx of visitors partly due to the commencement of scheduled flights to Guyana by British Airways. “We will see a large influx of our visitors and the law of probability will say that you have more people visiting, more people. more people having experiences, more people out in the riverways that you will have more incidents so we don’t want a flood of more incidents,” said Ms Walrond, a lawyer by profession.

The Tourism Minister made it clear that a number of the laws would be amended to provide for penalties because persons sometimes do not obey them if they are no provisions for punishment.  “That will be part of my suggestion in revising the regulations that we currently have. In  my view, there are not enough penalties attached,” she said.

Director of Maritime Safety at the Maritime Administration (MARAD), Captain Romain Seurattan said his agency was concerned that boat operators and passengers in a number of areas such as Moruca and Pomeroon were not wearing life jackets. “We are addressing those issues, having more manpower on the ground,” he said. Mr Seurattan said life jackets had been provided to persons free of cost. He said MARAD and GTA have in the past teamed up to train and licence boating personnel. He said oral examinations are provided to competent boat captains although many of them are not literate.

Veteran tour operator, Frank Singh noted that there is a misconception that all Amerindians can swim.

The GTA Director said the Authority would next year ask the Guyana Defence Force (GDF) to provide more training sessions for first responders with a focus in search and rescue, and jungle survival.

Anders Andersen, a tour operator in the Rupununi, said his boat captains were asking for real-life simulations of accidents on the rapids so that they would be able to understand how to respond and cope if there is a mishap. “If you have never really been in the water, if you have never been tested in a rapid, then you don’t really know what’s going to happen while you’re there,” he said.  Mr Andersen and GTA were expected to have further discussions on hiring the right instructors to train the boat captains.