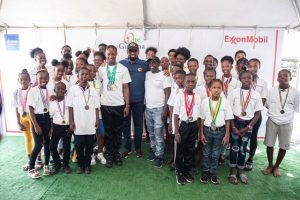 The Buxton Youth Developers will receive some GY$1 million from the government to ensure the further development of youngsters in and around the community, the government’s Department of Public Information (DPI) reported.

President,  Mohamed Irfaan Ali made the commitment Friday while giving remarks at the opening of the newly-upgraded Vigilance Play Field,  East Coast of Demerara.

He underscored the government’s plans to create an academy where Guyanese athletes could achieve their greatest potential and enhance their skills.

As part of the strategic interventions outlined for the development of youths in the area, President Ali said the intention is to establish a computer lab at the playfield with one-year free internet access.

Representatives from the Ministry of Education will also visit and enroll community members in the recently launched Guyana Coders Initiative (GCI).

The coders’ programme, which is a joint effort between the Governments of Guyana and the United Arab Emirates (UAE) will see some 1,500 Guyanese being trained as online computer programmers.

The 17-year-old athlete performed well at the Junior CARIFTA Games in Jamaica this year. He later represented Guyana in Brazil, earning a silver medal.

The young man also participated in the Guyana games, where he won the 100 and 200-metre races and received a gold medal in the 4×1 relay.

Achievements like these, Dr Ali asserted, are worthy of commendations. And while there are challenges during Newton’s path to becoming successful, President Ali said, “the Government of Guyana will ensure that you get the best possible option for your career.“

“We will ensure that we put the resources to be able to give you the best possible training, and all that you need now to take your career forward… not only are you impressive with your athletics skills, but I just learned that your grades and academic work are also impressive.”
Meanwhile, the revamped playfield at Vigilance was made possible through the joint effort of the government, ExxonMobil, and Cerulean Inc., among other key stakeholders.

ExxonMobil’s Production Manager, Mike Ryan noted that the intervention is not only to develop the infrastructure but a move to prepare the youths to face the future.

He congratulated the group coach for working with the young minds and believes the intervention will bring about positive changes in their lives.

Cerulean Inc.’s Managing Director, Lyndell Danzie-Black said the organisation is heartened to witness the growth of the initiative.

The agency, she noted, has been working with the community to get a deeper insight into its daily operations, especially the youths who utilise the ground for recreational purposes.

Meanwhile, founder and coordinator of the Buxton Youth Developers, Robin Phillips expressed thanks to the supporting partners for their support throughout the year and noted that the intervention has pushed the performance of the athletes.

President Ali said Phillips will now join the training coach programme where he will be rewarded for his tremendous work over the years.

The Buxton Youth Developers was established in 2005.