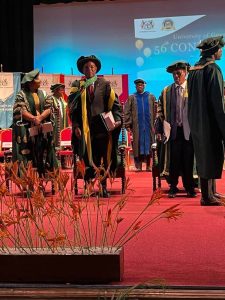 Eureka’s Chief Executive Officer (CEO), William Andrew Boyle adds yet another feather to his cap, as he was bestowed an Honorary Doctorate of Letters, by the University of Guyana (UG) on December 9, 2022 during its Commencement Exercises.  Boyle also gave the Graduation address.

An honorary degree is an academic tribute to those whose life and work exemplify professional, intellectual, or artistic achievement. It recognizes and appreciates those who have made significant contributions to society, the state, and the University.

Dr. Edward Greene, esteemed Chancellor along with Dr. Paloma Mohamed-Martin, UG’s Vice Chancellor conferred this honorable accolade during the graduation ceremony. Vice Chancellor Mohamed-Martin, in a letter addressed to Boyle wrote: “It is my distinct pleasure to write on behalf of The University of Guyana that the Special Conferral Committee considers you of the highest caliber of human and exemplar in the field of microbiology, and entrepreneurship”.

After years in the local business industry, this flourishing businessman and Microbiologist has carefully built himself an empire in the form of the revered Eureka Medical Laboratory (EML). With three other establishments under his belt, several coveted awards, and a dedicated staff of almost 100 workers, he is unquestionably the epitome of excellence in the area of health and entrepreneurship.

William Andrew Boyle, also referred to as ‘Andy,’ was born on May 11, 1964 and is the third of 10 siblings. His parents; Claudia and the late William Fitzgerald Boyle, created a comfortable and modest home for their family at Haraculi, Kimbia, a remote area which is located 79 miles up the Berbice River.

What is behind his success?

“I remember that it was my grandfather, Menzo Bender, who influenced me significantly, as it relates to the core principles I have to this day. I recall that grandpa and I would sit together and he would share very important lessons with me. One such lesson was that your word is your bond. This meant that a commitment if made, must be honored,” Boyle expressed.

In spite of the naysayers and a humble start, the Eureka establishment which is located at 263 Thomas Street, North Cummingsburg now has nine spanking branches. There are offices in St. Vincent, Parika, Anna Regina, New Amsterdam, Rose Hall, Linden, Bartica and Diamond. The newest is one in Corriverton, Berbice.

The ability of EML to blend with the demands of its environment, took place in 2017 when it partnered with Canada based Atlantic Offshore Medical Services to form a partnership called Eureka Medical Offshore Services (EAOMS)to serve the expanding demand of the oil and gas industry. To date EAOMS serves 35 companies involved in oil and gas.

During the Pandemic, EML was one of the pioneers to offer private testing, even if it had to send samples abroad, and the first private laboratory to partner with the government to facilitate airport testing to contain the spread of COVID. It is the first one as well to use PCR testing for COVID, withstanding all the challenges of the different COVID variants.

OTHER AWARDS
It can be recalled that in 2018, Boyle copped the Entrepreneur Laureate Award which forms part of the Anthony N. Sabga Caribbean Awards for Excellence (ANSA SABGA).  The SABGA awards, which is now the Caribbean’s leading recognition program, was initiated by the late Anthony Sabga 1st, Founder and Chairman of the ANSA McAL Group of Companies.

In the same year, he garnered the most prestigious national accolade, The Golden Arrow Award of Achievement.

These awards are amongst numerous others.

UPCOMING BOOK
Slowly but surely, Boyle is fast becoming his own legend. Early next year, he expects to launch his autobiography: ‘Aspire: Dare to Dream’. The book recounts his life history from birth to him being catapulted to unprecedented success.

In the book, you will find his motto: SKY is the limit, which epitomizes his dream that seemed unreachable, but now a reality with limitless and immense possibilities.

At 58, Andy’s Road has yet to reach more turning points.

COMMENCEMENT MESSAGE
In his graduation message, Boyle emphasized “you are special, be a paragon of virtue and uprightness. Your vision and goal need to accompany your purpose.”

Maybe this is his secret to success. It proves to show that his cap still has spaces for more feathers to come.