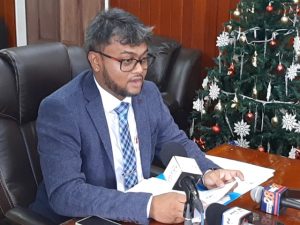 Former Staff Sergeant Ubraj Narine was disembodied from the Guyana National Rerserve of the Guyana Defence Force, with effect from Tuesday December 13, 2022 for conduct ‘ Unbecoming of a soldier’ because of his utterances on Monday night in his capacity as Mayor of Georgetown.

“Mr Narine on Monday December 12, 2022, was engaged in a civil protest action during which he uttered words that are considered to have promoted racial and religious intolerance , as well as political dissonance,” the GDF said in a statement.

Civilian police on Wednesday arrested Mr Narine and General Secretary of the Alliance For Change at the Mayor’s office. They were escorted to the Brickdam Police Station where they were charged with breaches of the Racial Hostility Act, Cybercrime Act and the Road Traffic Act. The duo was granted GY$100,000 bail and they are expected to appear in court Thursday morning.

The GDF said several disparaging comments were made against the Commander in Chief and his government. “As a member of the Guyana Defence Force, albeit Regular or Reserve, Mr Narine was required to conduct himself in a manner that uphold the professional image and integrity of the Force,” the statement added.

The GDF explained that members of the Force ‘Regular and Reserve’ , are required to adhere to the policies, regulations and protocols of the Force; the values and standards of the military are examples of such. These require, among others, adherence to core values such as discipline, integrity and loyalty.

Similarly, according to the military,  it requires members of the Force to adhere to core standards such as responsibility, respect for the law, respect for others, correct conduct and appropriate social behaviour.

Mr Ubraj Narine’s conduct on Monday December 12, 2022 violated  those standards and others, the army added.