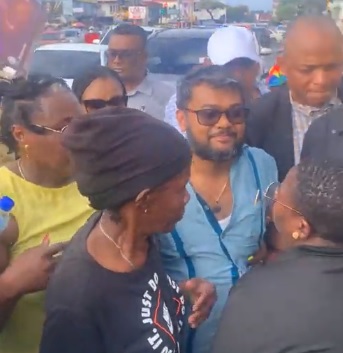 City Mayor Ubraj Narine and Alliance For Change General Secretary Sherod Duncan as they walked to the Brickdam Police Station.

Present with him were Attorneys-at-Law Roysdale Forde and Darren Wade. Mr Forde confirmed that the arrest of the duo had to do with the Mayor’s alleged remarks while supporting vendors on New Market Street. Mr Forde said his clients were expected to be released on  bail.

A number of the vendors begged the Mayor not to leave his office. Instead, he complied with the Police instructions and said he would prefer to walk to the station.

Police wanted to transport him by vehicle but the vendors objected and he also opted to walk from City Hall to Brickdam Police Station.

The City Mayor’s arrest came one day after Home Affairs Minister Robeson Benn said the police had been asked to investigate remarks he made while in solidarity with food vendors outside Georgetown Hospital against the removal of their stalls and caravans.

Mr Narine had asked whether President Irfaan Ali was refusing to collaborate with him because he is a Hindu. Further, the Mayor had queried whether the President was presiding over the creation of an Islamic State.

The Mayor has since apologised unreservedly for his remarks. Deputy Mayor Alfred Mentore has distanced himself from the Mayor’s comments but maintains his support for consultation between Central Government and the Municipality.

Opposition Leader Aubrey Norton has dismissed calls for the Mayor to be removed or resign and has called the Private Sector Commission a “stooge” of the governing People’s Progressive Party.

2022-12-14
Denis Chabrol
Previous: Teachers to get salary increases but no date fixed
Next: City Mayor removed from GDF Reserve for conduct unbecoming of a soldier