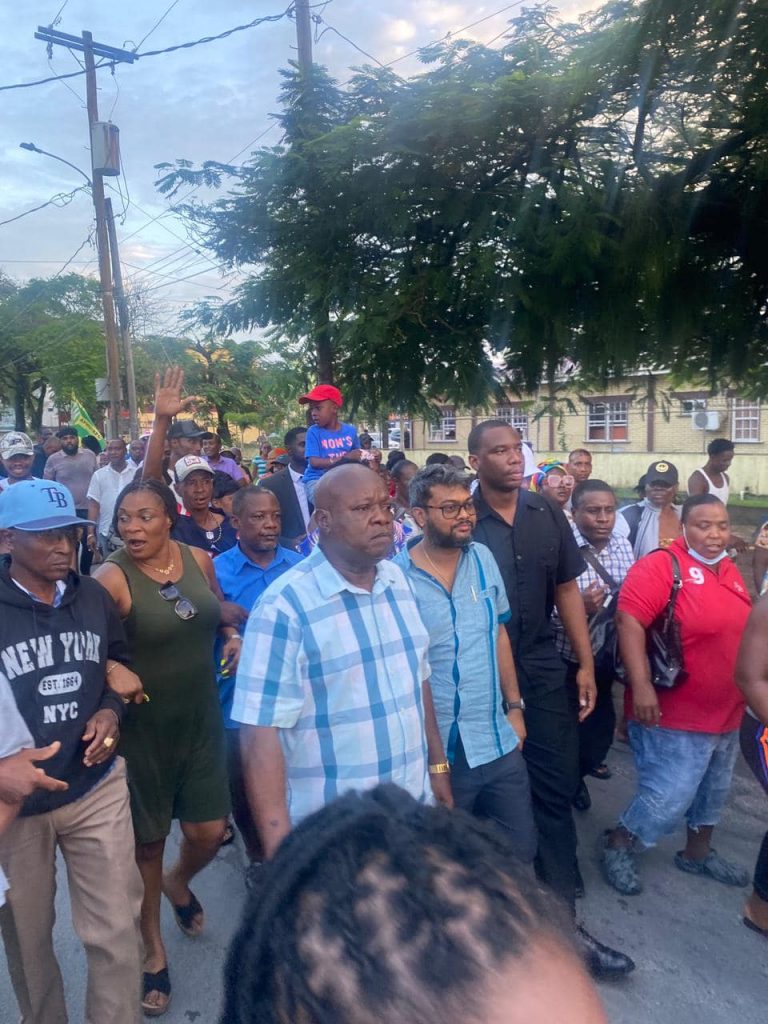 Opposition Leader Aubrey Norton is hoping that the arrest and charge of City Mayor Ubraj Narine and opposition parliamentarian Sherod Duncan will galvanise supporters against what he terms political harassment by the government but the incumbent People’s Progressive Party Civic (PPPC) said he is stoking racism.

The Opposition condemns the actions of the PPP regime and warns them that they are pushing the people of Guyana to the brink. We urge the people to continue to resist this regime until it is prepared to operate based on the Rule of Law.

“We call on all Guyanese, especially the people of Georgetown to condemn the actions of the PPP regime and come out in support of the Mayor of Georgetown, Mr. Ubraj Narine and Member of Parliament, Mr. Sherod Duncan,” he said.

His call on supporters comes amid small turnouts at weekly opposition protests outside the Guyana Elections Commission for a clean voters list.

After Mr Narine and Mr Duncan were accompanied by a large group of vendors and opposition supporters from the Mayor’s office to the Brickdam Police Station, they were granted GY$100,000 station bail each. They are scheduled to appear in court on Thursday at 9 AM.

The PPP slammed the Opposition Leader and the Mayor for failing to recognise that the presence of the food caravans on New Market Street between Thomas and East Streets has been blocking easy access to the Georgetown Public Hospital, and that concerns had been raised by the hospital administration with the Mayor since 2015.

Further, the PPP accused Mr N0rton of fanning racism and division. “The blame for this uncaring, insensitive, obstructionist act should be laid squarely at the feet of PNC and Opposition Leader Mr. Aubrey Norton who has been unabatingly setting a tone of obstruction
and division along ethnic and religious lines,” the PPP said.

The caravans were removed during the pre-dawn hours of Wednesday, and there was no clash with vendors unlike Monday night when the Mayor and other persons blocked the passage of the vehicle with a caravan.

The Opposition Leader and the PPP also traded blame on which administration was using the police force for political ends. “We hope good sense will prevail and the PPP will end its political witch hunt and free the Guyana Police Force from its political control, domination and politicization,” he said.

But the PPP, using evidence from the Commission of Inquiry into the 2020 General and Regional Elections, said it was the PNC-led A Partnership for National Unity+Alliance For Change (APNU) administration that had deployed police for politically partisan reasons at the  Region Four Returning Office during controversy over the tabulation of votes for that district. “As though Guyanese have short memories, Mr. Norton accused the PPP/C government of politicising the Guyana Police Force. Perhaps he is oblivious to the numerous revelations coming out at the Commission of Inquiry of his party’s shameless use of police ranks during their attempt to subvert the will of the electorate during the 2020 General and Regional Elections, but rest assured Guyanese are not,” the PPP said in its statement.

The opposition has dismissed the Commission of Inquiry and instead has said grievances about the elections should be heard through an elections petition.

The Courts have so far dismissed efforts to have the petitions heard.