An Air Services Limited (ASL) pilot said he was dismissed because he raised concerns that the main rotor blades on the company’s helicopter was unsafe as they had caused the aircraft to vibrate heavily while airborne, forcing him to make an emergency landing.

While Captain Akeem Stoll said he complained to the Labour Ministry, the minister Joseph Hamilton said he was unaware about the issue and promised to check with his staff on Thursday.

Director-General of the Guyana Civil Aviation Authority (GCAA) Retired Lt. Col. Egbert Field confirmed to Demerara Waves Online News that the helicopter, bearing registration number 8R-GTR, has been grounded due to a problem with the blades. “Yes, this led to the certificate of airworthiness becoming invalid,” he said in a brief comment.  Mr Stoll said he subsequently lodged a complaint with the GCAA and they assured him that they started a probe into the issue.

The pilot told Demerara Waves Online News that one week after he lodged report with the airline, he was called in by the Human Resources Department and handed a dismissal letter, citing him for disruption of the domestic carrier’s operations. He, however, believed that he was fired because he objected to flying a chopper that was risky. “It’s like these guys are telling me ‘hey you need to keep flying this helicopter’ even though I was showing them this thing has an issue so they said I disrupted their operations, after eight years working for this company,” he said.

After working eight years with the company for a take-home pay of GY$250,000 per month, he said ASL was now threatening legal action for GY$7.2 million as the remainder of his debt to the company for training as a helicopter pilot.

Mr Stoll said that in relation to the incident involving the Bell 206 L4 helicopter on June 7, 2022, he told the company that he was forced to make an emergency landing on a road, with nearby trees, while returning from Toraparu  area because the chopper was vibrating badly and he was scared for his life. “I’ve experienced my helicopter severely vibrating, tossing me out of my seat. Luckily, I was well strapped with seat belt and shoulder harness. A sudden imbalance in the main rotor system creating an enormous vibration; the sense of the helicopter disintegrating,” he said. 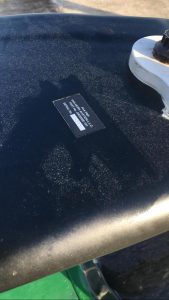 The Vanhorn name plate on the main rotor blade .

Captain Stoll said on his return to Ogle, he was sent on a few days leave because he was evidently traumatised and he later made a presentation to the company based on his research that the blade manufacturer, Vanhorn, was causing a severe vertical hop in flight. “It is pretty much an understatement from the Vanhorn company. This thing is of a more severe vibration where the aircraft is trying to rip itself apart,” he said.

The pilot said he was surprised at his dismissal because he did an emergency landing safely and informed the company that the blades have an issue, based on evidence. “I don’t think they were happy to  see that I was aware that that blade had an issue and I showed them and then I got a random termination letter,” he said.

Mr Stoll said shortly after the blades were changed at Ogle and flown to other locations of Guyana, there was no vibration because he was transporting passengers and cargo, but the vibration occurred when there was one pilot, less than one tank of fuel and no cargo.

The former ASL pilot said the Original Equipment Manufacturer (OEM) blades were replaced with Vanhorn in May or June.

2022-12-07
Denis Chabrol
Previous: Rural TeleMedicine Clinic launched in Rupununi
Next: Mingo did not use Statements of Poll, despite GECOM’s decision- GECOM Chairman