Mingo did not use Statements of Poll, despite GECOM’s decision- GECOM Chairman 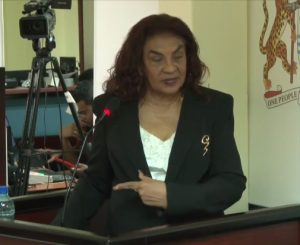 GECOM Chairman Retired Justice Claudette Singh on the stand at the 2020 Election Commission of Inquiry.

Chairman of the Guyana Elections Commission (GECOM) Retired Justice Claudette Singh said the seven-member commission had decided that only statements of poll were to be used to tally elections results and she had even insisted to Region Four Returning Officer Clairmont Mingo that no spreadsheets were to be used.

“I understood later that Mingo was using a spreadsheet… It would have been the next day,” she told the year’s final day of public hearings.  Justice Singh said she had been first made aware of the use of a spreadsheet when now deceased Election Commissioner Bibi Shadick had told her that she was going to a meeting with then Opposition Leader Bharrat Jagdeo to discuss a report that a spreadsheet was being used.  “As far as I am aware, no decision was taken by the Commission to use a spreadsheet,” she said.

The GECOM Chairman said she had sought to enquire what had transpired as she had been informed that the matter had been resolved. She said the GECOM Commission had made efforts to discuss the issue on March 5 but by that time Mr Mingo had been making a declaration even before the tabulation of the results.

Ms Singh, she said, informed her that APNU+AFC Election Commissioner Charles Corbin had told her that “you cannot interfere.”

Ms Singh said she had been surprised that a spreadsheet had been used and she had stressed to Mingo in court that only the statements should have been used to tabulate the results.

Her account came one day after Assistant Registration Officer of GECOM Alexandra Bowman had said that either Mr Mingo or Ms Michelle Miller had instructed her to stop using the Statements of Poll and use a spreadsheet that was eventually provided on her personal flash drive by GECOM official Enrique Livan.

Ms Singh said she had planned to order a recount of the results, but she could not have done anything because by that time People’s Progressive Party (PPP) lawyer Anil Nandlall had filed legal action.

The GECOM official confirmed that she made six attempts to obtain the report from the then Chief Election Officer Keith Lowenfield but no efforts had been made to discipline him because “everybody wanted the report.” Questioned about a press release that had been issued in which the Chief Election Officer had been described as a constitutional officer, the retired Chief Justice said Mr Lowenfield was not a constitutional officer but “an election officer.”

The GECOM Chairman recalled then Deputy Chief Elections Officer, Roxanne Myers telling her on March 12, 2020, that her understanding of a High Court ruling had been that any means could have been used to tabulate the results, but she (Ms Singh) said she had read the judgment and that was not the meaning.

The then Chief Elections Officer had decided to use a shed at GECOM’s headquarters to conduct the tabulation which Ms Singh said prompted her to ask the reason and he had informed her that there was  a “lack of facilities at the Ashmin’s Building.” She said she had not asked what facilities were required, but had been told afterwards that a piece of cloth had been used to project the results, The GECOM Chairman acknowledged that nothing could have impeded anyone taking the projector and cloth in a car to the Ashmin’s Building.

Ms Singh said she had never spoken with then Police Commissioner Leslie James and had never requested the Tactical Services Unit of the Guyana Police Force or any other police to clear the Ashmin’s Building where the Region Four Returning Office had been located. She said, too, that no other Election Commissioner had informed her that a request had been made for the TSU to be deployed. However, she said she was “very scared for my life” and she called then-government minister Amna Ally, her friend, for assistance and later she had mistakenly called Inspector Narine of the Police Force Major Crimes Unit and related her concern. “I was afraid the people were breaking the door,” she said.

“Commissioner, there were threats against my life,” she said, adding that she had no reason to mistrust GECOM Commissioners or staff.  She said she did not answer her phone and did not know who to trust. The GECOM Chairman was questioned against the backdrop of a Commissioner telling the Inquiry that he had been trying to reach her without success.

The GECOM Chairman said she had been made aware of the presence of the TSU ranks at GECOM the following and though “I was very concerned about that”, she never asked any questions.  Further, she said she had also never asked about why a government minister had held a meeting at the Returning Office. Then Foreign Affairs Minister Dr Karen Cummings had met with election observers there on March 8, 2020, and had said that they had felt threatened by her remarks that she had been told to take away their accreditation.

Ms Singh said she did not leave the Returning Office, despite a request by the then Chief Election Officer that she should do so. She said she was unaware that Ms Myers had instructed persons to leave the premises.

According to the Chairman, she did not believe that a bomb had been planted in the building and she had remained inside with Ms Shadick.