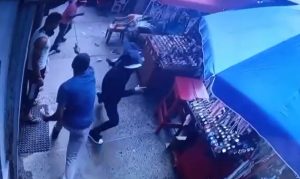 The bandit (backing camera) shooting the money changer as his accomplice (at right) flees the scene.

A money changer has been shot and robbed in the busy Stabroek Market area, after his colleague attempted to defend himself with a knife, police said.

“During the confrontation, the suspect who was armed with a firearm, relieved one of the victims of his money. While attempting to rob the other victim, who pulled out a knife from the waist of his pants to defend himself, the armed suspect discharged a round from the firearm, which hit the second victim on his right lower forearm and his right side abdomen,” police said.

The incident occurred at about 1:45 PM Monday. A surveillance video recording shows that the money changers were sitting opposite Ghandi’s store on Water Street when two men rushed up to him. 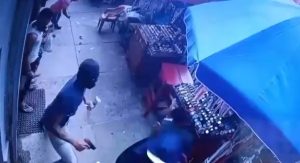 The bandit, with stolen cash and gun in hands, as he escapes shortly after shooting one of the money changers on Water Street.

The robbers were reportedly masked and they escaped on a motorcycle.

Police did not say how much money the bandits grabbed from the money changers.

Monday’s incident occurred despite the fact that uniformed and plainclothes police have been deployed in large numbers in Georgetown’s shopping districts for the Christmas Season.

This is believed to be the first such brazen armed robbery for November-December, 2022 in the heart of commercial Georgetown.