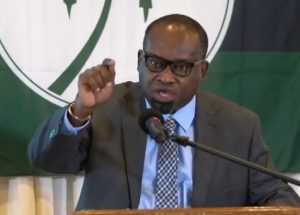 The nine Alliance For Change (AFC) parliamentarians would not lose their seats after that party officially walks away from the coalition with the People’s National Congress Reform-led A Partnership for National Unity (APNU) at month-end, coalition front-bencher Attorney-at-Law Roysdale Forde said Tuesday.

APNU said up to Tuesday it had not received any official correspondence from AFC.

This is the clearest signal ever that AFC’s Khemraj Ramjattan, Cathy Hughes, Sherod Duncan, Haimraj Rajkumar, David Patterson, Juretha Fernandes and Beverley Alert,  Deonarine Ramsaroop and Devin Sears would not be recalled after December 31. Previously, Opposition Leader  Aubrey Norton, who is also the PNCR’s Leader, on November 2022 had left his options open after the AFC exits the coalition. “When we are formally communicated with , we will then make the decisions as to what we will do. There are a number of options that exist and we will at the right time respond,” he had said.

But on Tuesday Mr Forde said that for the life of this term, “we remain one s0lid, complete unbreakable list” in the National Assembly.

PNCR Executive Member, Ganesh Mahipaul added that APNU  is a “strong, resilient political party and can competently do what is necessary for the people of this c0untry.”  At the same time, he acknowledged that it had become a bit easier when APNU and AFC coalesced.

The AFC had often complained about a lack of consultation by APNU/PNCR and determination to sideline some persons.