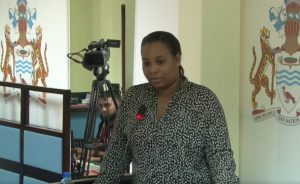 Guyana Elections Commission (GECOM) Assistant Registration Officer, Alexandra Bowman on Wednesday told a Commission of Inquiry that she had been instructed to read 2020 election results from a spreadsheet but the numbers had triggered objections from People’s Progressive Party Civic (PPPC) party representatives.

“When it was my turn to call, I was instructed that we won’t be calling from the SOPs (Statements of Poll) anymore, we’ll be calling from the spreadsheet,” she said. The witness said she could not recall clearly whether it was then Region Four Returning Officer Clairmont Mingo or Ms Michelle Miller who had given that instruction.

Under oath before the three-man Commission, Ms Bowman said after Mr Mingo gave those instructions, she provided her personal flash drive to fellow GECOM official Enrique Livan for him to put a copy of the spreadsheet on. She did not recall whether any other GECOM official had been making a record of the numbers that she had been calling and she also could not have say whether they had been the same as those on the SOPs. Ms Bowman said representatives of the PPP began objecting to the numbers and eventually quarrels erupted with their counterparts from A Partnership for National Unity+Alliance For Change (APNU+AFC). “As I began to call, there were some objections from the PPPC party… that the numbers that I was calling did not reflect what they had…there was just back and forth and a lot of noise with the other party- the APNU+AFC,” she said. Ms Bowman noted that APNU+AFC had not objected to the numbers.

She said after the parties began objecting she was wondering whether the numbers were accurate.

Ms Bowman said she followed Ms Miller’s instructions to “keep calling”, adding that she obeyed the instructions because she had been seven months pregnant and had just wanted to complete the task. Eventually, she said the Deputy Chief Elections Officer Roxanne Myers and the GECOM Chairman Retired Justice Claudette Singh had gone to the tabulation room where she had been working and had enquired about her condition after which she had been told told to go home because she could not have continued.

She said Mr Livan never offered to make any corrections or enquired about the problem.

Ms Bowman said months later she had requested the return of her flash drive but Duarte Hetsberger, then Personal Assistant to the Chief Elections Officer, had told her that would be impossible because it was now “evidence”.

The Assistant Registration remembered SOPs arriving “relatively late” at the Region Four Returning Office, Ashmin’s Building, High and Hadfield Streets on March 2, 2020 and clerks were waiting to call numbers from those SOPs.  Ms Bowman said that up to March 2 she had not received any instruction to call numbers from any other documents.

Saying that she was “relatively familiar” with the electoral process, Ms Bowman said she was never asked to use a spreadsheet to call the numbers previously at an election.

The GECOM said she had observed that a number of clerical assistants had been typing what appeared to have been numbers from the Statements of Poll into a computer. She added that most of the yellow envelopes had been already opened by the Returning Officer.

Three other GECOM officials- Sheffern February, Michelle Miller and Carolyn Duncan- opted to remain silent when they appeared before the COI as they are facing a criminal trial for election related offences. Their brief appearance followed the High Court’s rejection of an application to prevent them from doing so on the grounds that there is a criminal trial.