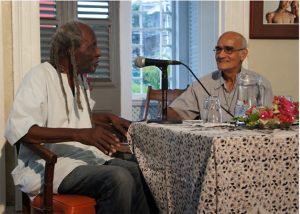 Monsignor Terrence Montrose remembered Fr Rodrigues as someone who made an indelible mark in Guyana’s political, religious and national sphere. “He had a great contribution in the political sphere, trying to bring fairness and democracy and so on. In the church sphere, he was a good priest working for people’s development and their spiritual life; he has made a great, big contribution” he told Demerara Waves Online News

Fr Rodrigues was also a one time senior academic at the University of Guyana.

He is also well-remembered for his sterling contribution in the fight f0r democracy and human rights in the 1970s and early 1990s alongside other Roman Catholic priests such as Frs Bernard Darke and Andrew Morrison,  civil society and political activists including Working People’s Alliance co-founder Dr Walter Rodney.

Father Darke and Dr Rodney were killed during that political period by pro-government actors.

“I best remember him as a friend when I was thrown in prison because I was talking to him,” Fr Montrose said.

Devout Roman Catholic, William Cox, who was closely associated with Fr Rodrigues in the Faith and Justice mission of the church was saddened at the passing of the priest, saying he also contributed to his personal development. “He was a mentor to me, and I consider him to be a revolutionary and most influential force in shaping the local Catholic Church ‘s position on social justice over the past forty years,” Mr Cox told Demerara Waves Online News.

Fr Rodrigues had been one of the most visible campaigners for justice for the freedom of People’s Progressive Party activist, Arnold Rampersaud, who had  been arrested on a bogus murder charge.