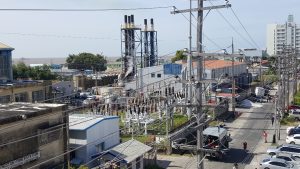 Government on Monday said it is pumping a GY$15.6 billion subsidy into the supply of electricity on the coastland as well as several interior towns and districts.

Public Works Minister II Deodat Indar said Guyana Power and Light (GPL), which supplies electricity to the Essequibo, Demerara and Berbice coastal communities, needed GY$14.3 billion more to cater for the sharp rise in the cost of fuel to power the electricity generators.

In seeking parliamentary approval for the monies, some of which have been already spent, he told the House that GPL’s fuel bill was GY$23 billion in 2021 but that has risen to GY$37 billion in 2022.

“That is on the heels of zero percent increase in the electricity bill going to residents and businesses. We have not increased  increased rates,” he said. He said approval for the extra GY$14.3 billion was sought to “offset the increase in fuel prices.”  He further explained that the relationship of fuel prices to total operational expense in 2020 was 60 percent and this year that went up t0 71 percent.

In relation to Linden, several other towns and interior districts, Mr Indar said there has been a 65 percent increase in the cost of fuel to power electricity generation stations in those areas.

Mr Indar said that has resulted in the government asking the House to approve an additional GY$1.39 billion for November and December =, 2022 due to the budgetary shortfall. “All of these monies that were requested under the Office of the Prime Minister is because of significant rise in fuel prices in the last year and these power companies operate on subsidies, as you know, and the original subsidy that was planned as voted provisions at the beginning of the year did not foresee that kind of market fluctuation,” he told the House.

Mr Indar stressed that the cost has nothing to do with the quantity but rather the cost of the fuel.

Eventually, the Public Works Minister conceded that the alternator at the Mahdia power station was defective and efforts were being made to effect repairs. “When problems happen, we fix them immediately,” he said, adding that some of the equipment has to be flown or shipped by boat to Georgetown for repairs.