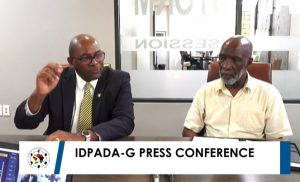 Att0rney-at-Law Nigel Hughes told reporters on Friday that the High Court has asked the Court to issue a mandatory order directing the Minister of Culture, Youth and Sport to pay immediately those funds they have already committed to pay.”  He noted that government has already committed itself to pay the financial support as the money has been approved in the 2022 National Budget which became the Appropriations Act.

Mr Hughes, who is representing that organisation in association with lawyers Dr Vivian Williams and Ronald Daniels, also said court papers cite the Minister of Culture Youth and Sport, the Minister of Finance Dr Ashni Singh and Attorney General Anil Nandlall for breach of contract and a violation of the principle of legitimate expectation,

Chairman of IDPADA-G, Vincent Alexander said the monthly subvention, estimated at just over GY$8 million, was stopped in September, 2022 apparently because his organisation had published an advertisement of Cuffy250’s annual forum under the theme “Resisting the Emerging Apartheid States”.

Mr Hughes explained that then President David Granger and current President Irfaan Ali had established a practice of annually providing subventions to IDPADA-G for them to carry out their programme from 2018 when the subvention was first approved and every year since.

“This creates what we call in law a legitimate expectation so IDPADA-G has met with ministers of the government, they established a relationship . That relationship matured into an agreement in which the government of Guyana undertook to pay and did pay to IDPADA-Gan annual subvention approved by the National Assembly, the highest forum of the country,” Mr Hughes said.

That lawyer said IDPADA-G, which is registered as a not-for-profit under the Companies Act, is entitled to the intervention and protection of the court against abuse of power more so since there had been no notice, consultation or engagement about the intention to stop the cash support and so provide an opportunity to be heard. “If the Government of Guyana sought to change its approach, it would have to give notice and invite IDPADA-G or offer them an opportunity to be heard on the reason why they were going to stop this annual appropriation to the association, ” he said.

Mr Hughes reasoned that the Guyana government breached its contract “without any explanation” with IDPADA-G because it committed itself to the subvention, sought parliamentary approval and paid it out for the planned work work programme. “That created what we call in law a contract between the government and IDPADA-G upon which IDPADA0G relied not only their commitment but their demonstrated acts of making this appropriation available to IDPADA-G and so one of the things,” he said.

According t0 that lawyer, IDPADA-G has now suffered tremendous loss on its own as well as to beneficiaries such as students of two schools. The organisation, he said, also risked being exposed to claims of breach contracts by other service providers or persons as those would have to be terminated.

IDPADA-G’s Chairman said that while this lawsuit is for monies for the coordinating mechanism up to the end of the current decade in 2024, his organisation would expect additional support if the UN designates a second decade for People of African Descent.

Since government stopped funding the organisation, a number of workers have been laid off and several work programmes have been trimmed. But Mr Alexander said there have been donations with more expected to be garnered through a GoFundme account to be established.

Court papers show that IDPADA-G is also seeking damages in excess of GY$100,000 each for wrongful withholding of funds and breach of its fundamental right to protection from deprivation of property as guaranteed by Guyana’s constitution.

Giving a background to the issue, Mr Alexander said IDPADA-G, which has 65 member organisations noted that government’s decision to end the funding had come sharply on the heels of verbal attacks.  “However, this decision coincided with a tirade against IDPADA-G and its leadership, ostensibly because IDPADA-G published an advertisement of Cuffy250’s annual forum under the theme “Resisting the Emerging Apartheid States,” he said.

IDPADA-G has already denied claims of malfeasance and non-delivery of its mandate as  being “without merit.” He noted that the Ministry of Finance’s special unit unit had conduced a special audit for 2018 to 2021 and the organisation had offered to fast-track the audit for 2022.

Mr Alexander said there had been requests to meet the President of Guyana and the Guyanese leader had also promised to meet but neither had materialised.