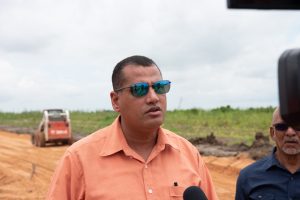 Housing and Water Minister, Collin Croal said works in the new housing development will commence within a few weeks. These include land preparation for the construction of roads and drainage in the area which spans approximately 250 acres.

“There is significant public sector investment in Linden as we speak…as part of our national housing programme, major works will be done in that area [Millie’s Hideout] as well as Amelia’s Ward.” Minister Croal  was quoted by government’s Department of Public Information as saying.

Millie’s Hideout has been identified for the construction of the housing units, as part of a commitment by President Irfaan Ali to construct 1,000 homes to meet the housing needs in the mining town.

Already, some 40 units are at various stages of completion at Amelia’s Ward Phase Two.

In the Amelia’s Ward housing development, the minister said works are ongoing to develop 500 serviced house lots. Once those works are completed, allottees will be able to identify their lots to commence the construction of their homes.

“Ongoing installation of lights and upgrade of roads in and around Linden and in Amelia’s Ward, Wismar and Wisroc housing Schemes are underway,” Minister Croal also disclosed.

Since August 2020, the government has invested more than $1 billion in infrastructure development in Region Ten.