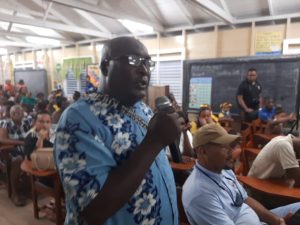 In the wake of President Irfaan Ali’s fiery response to a call for government ministers to involve the elected Mocha-Arcadia local council and a concern that  the four  opposition-controlled neighbourhood councils in Region Four were not given a GY$4 million clean-up grant, the Chairman of the Mocha-Arcadia Local Council Rudolph Adams said he was left aghast by the Guyanese leader’s reaction.

On the floor at Sunday’s community meeting, Mr Adams said since the People’s Progressive Party Civic (PPPC) returned to office in March 2020, the local council has tried to engage as many ministers as possible.  He said the council only knows about the ministers’ visits after they have left. “It’s only when they leave that the ministers are informed that a minister was visiting here. It is really unfortunate,” he told the President.

After the NDC Chairman noted that it was only after several visits by Public Service Minister Sonia Parag that he was aware that she was the minister, the President used the opportunity to urge attendees to congratulate the minister for visiting that community frequently. He also used the opportunity to state that central government teams would be visiting all communities. “Now and in the future, I am notifying the NDC that the ministers of this government will be visiting every community as long as it takes so at this meeting today, let me very clear at this meeting today, I am here notifying this community that the Government of Guyana that consists of a cabinet will be working with every citizen, every community, every household so don’t worry about it anymore. Notified!,” Dr Ali said. 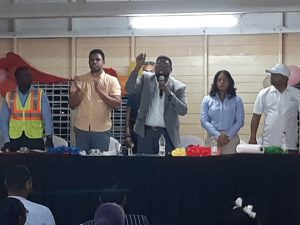 Opposition A Partnership for National Unity+Alliance For Change parliamentarian, Nima Flue-Bess, however, questioned the President’s sincerity to run the country properly. “The chairman said they have not even been given the courtesy of communication when government officials are visiting the area. Ali’s response is to deflect and shout that they can walk into any community at any time completely ignoring the elected bodies that govern at the local level. How can you talk about democracy and good governance and not be inclusive and respectful of the people’s local representatives?,” she said.

The NDC Chairman reiterated that the Mocha-Arcadia Neighbourhood Council was ready to work with the government and in addition to Ms Parag “all the other ministers are welcome into our community to engage us at the local government level to work in the interest of this community.”

After Mr Adams sought to make representation for a large football ground aback of Mocha-Arcadia, Dr Ali  said the Primary School ground would be fixed as a matter of priority and, at his request, many of the attendees said that ground should be fixed first. The President turned down the NDC Chairman’s request for the central government to provide a bobcat to the NDC. “We are presenting you with roads, drainage, agricultural land, drainage facilities- all of those things. Aren’t we doing that comrades?,” he said amid applause, adding that if the bobcat was provided, the NDC would ask for fuel. ”Let’s work on this thing with this community and work on this priority. Let’s not go there, let’s not go there,” the President said.

Working with the villagers

In response to concerns by the NDC Chairman that the Mocha-Arcadia NDC was among four such Councils that have not been given a GY$4 million clean-up grant, the President suggested strongly that the Council would be left out of the process. “We are going to be working with the villagers in this NDC because they have been asking us to work with them to have them involved in the small contracts in the cleaning up of the community,” he said. The President criticised the NDC Chairman for not disclosing that the Ministry of Agriculture is working with farmers to create drainage for more than 100 acres of lands.

The President said the central government’s decision was based on letters and petitions from the community, they would be involved directly and “nothing is wrong with that.”

As the NDC Chairman attempted to point out that four of the 17 NDCs have not been given the clean-up grant, Dr Ali said there are other NDCs that could say that the Central government has not injected GY$192 million in their communities unlike Mocha-Arcadia. Pressing his point about apparent political marginalisation of his Council and three others because they are mainly from the opposition A Partnership for National Unity+Alliance For Change, the NDC Chairman came in for a verbal onslaught by the President. “It’s an insult for you to tell these people that their lives are controlled by the coalition. No one’s life is controlled by anyone but God. Take that and take it to the bank and bank it,” he said.

Taking to his feet, The President said he would not disrespect the attendees by telling them that their lives are controlled by his People’s Progressive Party (PPP).

But Mr Adams on Tuesday told Demerara Waves that he was “surprised” at the President’s “outburst” and  he now has to question the importance of local government elections. “The statement that the President made- I really don’t know if there is any use for Local Government Elections because if you’re saying that you’re dealing directly with the people, where does the NDC stand,” he said. Ms Flue-Bess also said the incumbent People’s Progressive Party Civic administration has demonstrated that it is not interested in local governance. “If this administration will continue to operate in such a disrespectful and dismissive manner then definitely their intention is to kill local democracy. As such, local  government elections will make little or no sense under the PPP/C,” she said.

The President was greeted warmly throughout his visit to the community.