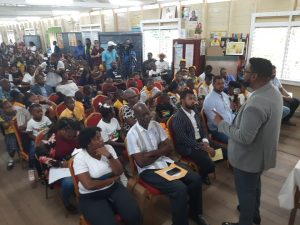 President Irfaan Ali on Sunday issued a public challenge to critics of his government to prove that it is practising racial discrimination.

“I challenge anyone to do an audit and tell me where the sensational and stupid narrative of marginalisation comes from,” he told a packed top flat of the Mocha-Arcadia Primary School.
His challenge came against the background of persistent accusations by the mainly Afro-Guyanese supported opposition A Partnership for National Unity+Alliance For Change (APNU+AFC) that the mosly Indo-Guyanese People’s Progressive Party Civic (PPPC) administration ilwas discriminating against Afro-Guyanese in the provision of land, jobs, contracts and other opportunities.
The President said he and his ministerial delegation were not campaigning but at the same time he hoped that “when the time comes you would do the right thing.”
“I’m not here to tell you to vote for the PPP but I’m here to tell you to benefit from the PPP,” he said.
Urging an Afro-Guyanese woman to stand telling the audience that she has been working in his home like a family member, he remarked that “I don’t need anyone to lecture to me.”
In clear reference to the opposition coalition, the President urged the gathering to ignore those in the society who are playing on the psychological and mental and that will get us nowhere.” 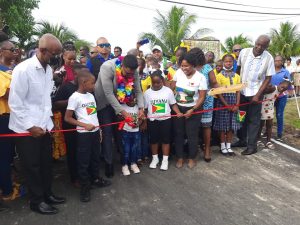 President Irfaan Ali and children at the ribbon-cutting ceremony for the rehabilitated Burnham Boulevard.

He thanked them for ignoring calls to boycott the meeting.
Pointing to the construction of the new East Bank Demerara Road limks aback Mocha-Arcadia, he said government valuators have already assessed that net value of properties have increased by 27 percent. Government is spending more than GY$192 million to reconstruct roads.
Teachers urged the President to provide sufficient textbooks, take steps to restore much-needed Internet access, improve ventilation f or the usually hot school and extend that building.
The President was asked to address long-outstanding house-lot applications and the provision of land titles.