42 US gallons of crude leaked into Guyana’s waters- ExxonMobil 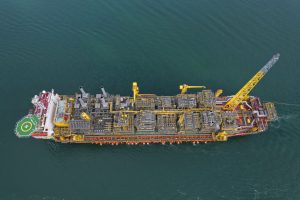 The ExxonMobil-controlled Esso Exploration Production and Guyana Limited (EEPGL) on Saturday said at least one barrel (42 US gallons) of crude oil leaked into Guyana’s Atlantic Ocean waters, but sought to downplay the severity of the incident.

“On Friday, September 9, 2022, the team on the Liza Unity FPSO observed a sheen on the water in the vicinity of the vessel. Initial investigations indicate that approximately one barrel of crude oil was released during a maintenance activity on the vessel. The activity was immediately stopped and the leak isolated,” ExxonMobil said.

The company suggested that its latest visual observation shows that there is no sign of oil in the water. “Earlier today, additional surveillance by helicopter confirmed that there was no sheen in the area; only a light sheen was perceptible approximately 20 km (13 miles) North West of the vessel. By midday on September 10th, a support vessel in the area confirmed no further sign of a sheen,” Exxon said.

The first indication that something had gone wrong at one of ExxonMobil’s operations offshore Guyana came some time Friday when most of the technical staff began returning to shore. The company, according to well-placed sources, has since flown in experts to address the first reported oil spill.

While ExxonMobil said “we notified all relevant government agencies including the Environmental Protection Agency,” none of the government agencies such as the Ministry of Natural Resources, Environmental Protection Agency and the Civil Defence Commission said anything about the incident. The Civil Defence Commission has received several training sessions and material support to prepare its oil spill response capacity.