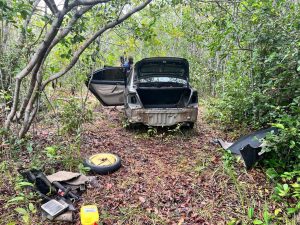 Seven cars and one handgun were found Wednesday as they were probing the theft of car from a 48-year old man a day earlier at Soesdyke, East Bank Demerara, the Guyana Police Force said.
Investigators said a after they found the 9MM handgun, several car lights and bumpers on the premises of a 26-year old suspect at Kuru Kuru, Soesdyke-Linden Highway, the man took them to St Cuthbert’s Mission where the stolen motor car, HD 514, and another vehicle, PSS 1871) that was reported stolen between August 13 and 14, 2022 from Supply Public Road, East Bank Demerara.
Police said while they were leaving St Cuthbert’s Mission- a 3-year old from Kuru Kuru and a 29-year old from Linden- were stopped and questioned. Investigators said the men claimed they were going to St Cuthbert’s Mission but they took possession of the car. “Based on further information received at the station, a search was conducted at an area at Long Creek and five motorcars that were stripped were found in a valley,” police added.
The apparent break-up of the car theft ring followed the theft of the 48-year old man’s Toyota Allion, HD 514 at Dookie Sand Road, Soesdyke, East Bank Demerara on August 2.