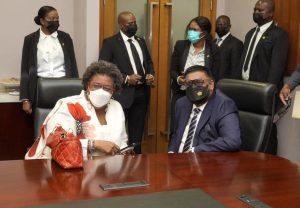 The Guyana Civil Aviation Authority (GCAA) confirmed that Barbados’ Prime Minister Mia Mottley was aboard a Guyana Defence Force (GDF) Skyvan on Sunday evening when its nose gear slipped off the taxiway at the Eugene F. Correia ‘Ogle’ International Airport.

While Ms Mottley said earlier Wednesday that she was not on an aircraft that was involved in an “accident”, she did not go on to say that there was indeed an incident.

The  GCAA said there was an incident involving the plane that flew President Irfaan Ali and Ms. Mottley from Boa Vista, Brazil.

The regulator said the aircraft landed safely and was taxing very slowly off the main runway when the incident occurred.

“While turning off the main runway unto the taxiway, the nose gear rolled across the grass at the edge of the taxiway. The aircraft was immediately stopped on the taxiway.

It is important to note that the entire aircraft remained firmly positioned on the taxiway with only the nose gear slightly in the grass,” the GCAA said

According to that aviation regulatory agency, all the passengers disembarked the aircraft safely and calmly through the normal exit.

The GCAA confirmed what has been already reported– there were no damages to the aircraft; the aircraft was pushed back and proceeded on its next leg of flight into the Cheddi Jagan International Airport (CJIA).

The GCAA said the plane was “totally serviceable.”

Before Wednesday evening’s statement, the GCAA was gagged from divulging information about the incident and Aviation Minister Juan Edghill played down the occurrence.