Govt tight-lipped on GDF plane incident with Ali, Motley aboard 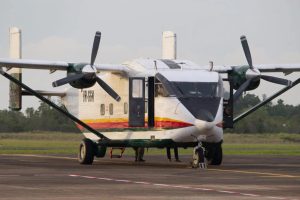 Even as the Guyana government has gagged itself about the slippage of the front wheel of the Guyana Defence Force (GDF) Skyvan off the taxiway at the Eugene F. Correia ‘Ogle’ Airport o  Sunday evening, an airport spokesman on Wednesday confirmed that there was a “minor incident”.

The plane had just returned from Boa Vista, Roraima, Brazil with the President of Guyana Dr Irfaan Ali and the Prime Minister of Barbados Mia Motley.

Airport spokesman, Christopher ‘Kit’ Nascimento told Demerara Waves Online News that as the Guyana Defence Force (GDF) Skyvan was turning around, it had virtually come to a stop and the front wheel slipped off to the earthen area. “When the aircraft was taxing from the runway on to the taxiway, that is when the wheel came off the edge of the taxiway,” he told Demerara Waves Online.

He said the Guyana Civil Aviation Authority (GCAA)  was informed and its inspectors went to the airport and conducted inspections twice including Monday night, but he was unaware whether that was done before or after the Skyvan departed for the Cheddi Jagan International Airport. “They did a full inspection afterwards. In fact, they inspected the full runway…There was an inspection on Monday morning and again on Monday night,” he said.

The  Ogle Airport Inc. spokesman said he was unofficially informed that the pilot said that his vision was obscured by fog. Mr Nascimento said the lights were “fully on” and they were inspected twice.

According to Mr Nascimento, President  and Prime Minister Motley “were fine, they just deplaned normally” and they were taken to the terminal to allow the plane to be pushed back on to the taxiway. “There was no damage to the plane…The plane was free to fly,” he said.

In what appeared to be a self-imposed gag order, the GCAA has not issued a statement on the incident, the Director-General Retired Lt. Col. Egbert Field could not be reached and Aviation Minister Juan Edghill said he was informed of an incident. “I’m not in a position to speak with you on that,” he said, and when asked whether Mr. Field could, he added, “I don’t know what you’re referring to.” “I have no knowledge, at this time, of an incident that can be discussed with the media or anybody so I don’t know what I can tell you.” He cautioned against making an “issue out of something that is a non-issue.” Pressed on what exactly happened, the Aviation Minister said, “when I see something in writing (from the parties concerned) then I would be able to tell you that.” Mr Edghill said he has not received any documentation or a report that suggests that there is an issue that needs to be addressed.

Aviation experts told Demerara Waves Online News on Wednesday that an investigation should focus on, among other issues, whether there was pilot fatigue, his last medical report and his vision including colour perception as well as the maintenance of the aircraft.

The sources said the GDF pilot and co-pilot have been automatically grounded until an investigation is completed.