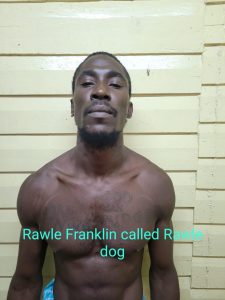 Police early Thursday morning rescued a taxi driver from his car trunk after shooting and injuring two suspected bandits and arresting two other accomplices in a yard in the vicinity of Hunter Street, Georgetown, the Guyana Police Force said.
The law enforcement agency said that after a high-speed chase, a white Allion car, bearing license plate PSS2705, crashed into a barrier, the men opened fire on police as they escaped on foot.
Police said they returned fire and Rawle Franklin, a known character to the police was seen lying on the northern parapet bleeding from injuries, while his accomplice, Andrew Newyear was seen lying in a yard with injuries.
Rescued from the car trunk was taxi driver Joshua Singh who told investigators that he was at Shamo Taxi Base on Vryheid’s Lust Railway Embankment Road, East Coast Demerara, working his uncle’s motorcar.
Further, police said two other suspects were found by ranks of the Anti-Crime Patrol hiding in a yard. The police also recovered a 9MM pistol along with a magazine containing 3 live 9MM rounds. 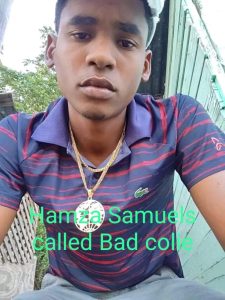 He said while he was seated in the driver’s seat of the said car, he was approached by three of the suspects, one of whom pointed a gun at him and ordered him out of the car. “He was afraid for his life and so he complied and the men ordered him into the trunk of the car and locked him in there. He further related that the car drove off heading west on the said Railway Embankment Road. The car later stopped and he heard talking, then it continued to drive and later he heard the car hit into something and thereafter he heard loud explosions suspected to be gunshots,” police said in a statement.

Police said they recovered eight cellular phones, one laptop computer and a female purse from he car.
According to police, they went into action after receiving a report at about 2:59 AM on 18th August, 2022 that persons in the motorcar robbed someone on Lamaha Street, Georgetown.
Police said the car was spotted on the Agricola Access Road and as it reached the Two Brothers Gas Station, it proceeded south on the Public Road. The Anticrime Patrol, according to police, subsequently attempted to intercept the vehicle but the driver drove away causing the Anti-Crime Patrol to continue to pursue the driver and occupants.

Police said the car, which was driving at a fast rate of speed,  turned on Hunter Street and approached Mandela Avenue where the driver lost control and collided to the northern barriers, causing damage to the vehicle and bringing it to a halt.

Ranks from the Anti-Crime Patrol then observed four male suspects exiting the said motorcar PSS 2705 and these suspects began to run away from the scene and the Anti-Crime Patrol ranks. “Immediately thereafter, loud explosions – suspected to be gunshots – were heard coming from the direction where the suspects were running, thereby causing a rank to discharge a round in the said direction where the suspected gunshots were coming from,” police said.