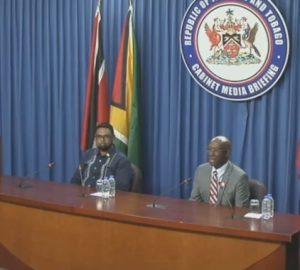 Guyana, and Trinidad and Tobago on Thursday agreed to begin mapping an energy strategy to maximise and integrate their natural gas reserves with those from Suriname and Brazil into the proposed South America energy corridor.

Trinidad and Tobago’s Prime Minister Dr Keith Rowley said energy officials of his country, Guyana and Suriname would meet and produce  recommendations by the end of September “in the context of our collaboration with the United States on this whole issue of regional energy security and the role that our God-given resources and our human capital can play in establishing a sustainable energy output from this part of the Caribbean.”

“That is specifically to do with options available for development of the gas business,” Dr Rowley added.

Dr Rowley, who is co-chair on energy with the United States,  remarked that “we are working very closely and collaborating” with Washington on energy security.  President Ali added that the energy plan entails pooling human resources, technology and natural resources.

Before leaving for Trinidad on Wednesday, the Guyanese leader said that sister CARICOM nation wants to be part of the discussion in the “building up” of energy corridor and the development of the natural gas reserves.

Dr Ali  said the two countries also plan to cooperate in the area of tourism, including regional transport, and boosting agricultural output. Guyana, and Trinidad and Tobago are formulating a joint food development plan in which action is being taken in the areas of agriculture, rice, human resources, agro-processing, livestock production, shade house and coconut project, technical task force, and corn and soya.

The President said a task force has been established to ensure the free flow of goods into both countries and the clear interpretation of laws and regulations governing such cargo.  He said it was important resolve those issues and eventually remove them from the agenda of the CARICOM Council for Trade and Economic Development and instead focus on policy matters.

The two leaders have already agreed that Guyana would provide 5,000 coconut plants to assist Trinidad and Tobago in revitalising that industry which had been devastated by pests.