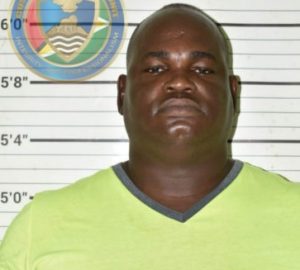 Attorney-at-Law Nigel Hughes on Monday formally asked President Irfaan Ali t0 provide witness protection for an undercover Guyanese policeman who has implicated at least one his colleagues of deliberately botching an investigation into the gunning down of Ricardo “Paper Shorts” Fagundes in March, 2021 in exchange for GY$30 million.

“We are further instructed to request as we hereby do, that in the absence of the establishment of a Protected Disclosures Commission as required by the aforementioned Act, that our client our client be provided with “witness protection” as set out in Section 20  of the Act. We fear that the life of our client is in grave danger,” Mr Hughes told Dr Ali.

Mr Hughes said his client Sergeant Dion Bascom has received death threats since making certain utterances on Social Media against the named senior police officer, the son of a well-known city gold dealer and his security guard. They have since dispatched letters from their lawyer to Mr Bascom refuting his claims and requesting a public apology or face multi-million dollar lawsuits.

Prior to Mr Bascom’s arrest by Customs Anti-Narcotic Unit (CANU) agents at a house where 1.5 kilogrammes of cocaine were allegedly found, he worked up to recently as a driver at a civilian organisation. He has been released from custody without charge for any drug related offence. According to his statement dated 7th February, 2022, he was an intelligence operative attached to the Major Crimes Unit and he had been subsequently instructed to go “deep cover” and was not required to report to the Criminal Investigations Department.

In a letter to the lawyer, Sohan J Poonai, who is representing the police officer, the gold dealer’s son and his named security guard, Mr Hughes maintained that Mr Bascom’s claims of their involvement are true. “We are instructed to inform you as we hereby do, that our client rejects the demands contained in several letters and has instructed to inform you that the contents of the broadcast are true in substance and in fact,” Mr Hughes told Mr Poonai.

Attorney-at-Law Hughes said Sergeant Bascom planned to defend himself in any defamation lawsuit that challenges his statements on Social Media. “We are finally instructed to inform you, as we hereby do. that should your clients contemplate the commencement of any of the proceedings contained in your letter, they will be stoutly defended,” he said.

Deported drug convict, Shaheed ‘Roger’ Khan, with whom Fagundes had been socialising at Palm Court, is already on record as saying that there was a cover-up of the killing of his family-friend

Mr. Hughes accompanied his letter to President Ali with Mr Bascom’s very detailed statement about the alleged roles of certain persons in the killing of Fagundes, the police officer’s alleged receipt of GY$30 million to cover up the probe, and the apparent advance notice to the security guard to leave his Bent Street, Georgetown home to avoid arrest.

The police officer, the gold dealer and the guard have denied the allegations that Bascom made on Social Media.