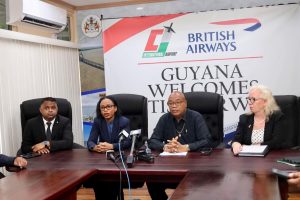 Guyana would not have to pay for vacant seats on British Airways flights to Guyana to keep the United Kingdom-headquartered carrier on the Georgetown-Gatwick route, Public Works Minister Juan Edghill said Wednesday.

Several tourism-dependent Caribbean island nations have over the years had to pay a number of international airlines for vacant seats especially during low season to ensure they do not give up the routes.

He also said the bulk of the money would be made on shuttling cargo such as Guyana’s agricultural produce, craft and other items to the UK market. The Cheddi Jagan International Airport’s statement quoted him as saying that the aircraft has a cargo hold volume of 4800 cubic feet for both passenger baggage and cargo. “This will immensely benefit imports and exports, while generating economic growth and
facilitating international trade,” he said.

The Boeing 777-200 ER can accommodate 332 passengers and will be one of the largest passenger carriers to serve the Guyana market.

“British Airways has studied the market and they have made a conscious business decision that what they’re doing is sustainable and adequate based on the numbers that we have provided and all the facts that are available to us so we see it as sustainable,” he told Demerara Waves Online News

The Public Works Minister, Public Works Minister II Deodat Indar, Tourism Minister Oneidge Walrond and UK High Commissioner Jane Miller and other officials were present during Wednesday’s announcement that British Airways would officially enter the Guyana market in 2023 to offer commercial flight operations to the traveling public. Tickets will officially go on sale from August 10, 2022 and it will operate two flights per week with connections via St Lucia.

Ms. Walrond said the entry of British Airways to the Guyana market would be boost for the local tourism in the areas of birding, nature “and adventure enthusiasts will find paradise in our untouched rainforests and savannahs, home to 820+ species of birds and exotic wildlife.”

“What’s even more important is the fact that the United  Kingdom, one of our main source markets has significant demand for
experiences which align with Guyana’s tourism products and which will, without a doubt, result in an influx of travellers to Guyana through this new route,” she said.

High Commissioner Miller remarked on Facebook that British Airways’ presence in the Guyana market paves the way for more Britons to visit this lone former British colony on the north-east coast of South America. “I’m so excited. This is great news for Guyana – UK relationship… and more Brits can experience the beauty of this stunning country,” she said of Guyana that attained independence from Britain in May, 1966.