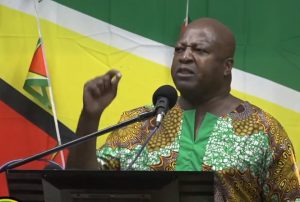 The parliamentary opposition A Partnership for National Unity+Alliance For Change (APNU+AFC) and the Working People’s Alliance (WPA) Tuesday night threw down the gauntlet at the two-year-old Irfaan Ali-led administration, signaling that they would block the holding of future elections with what they regard as a padded voters list and pressure the government to address 0ther concerns.

“We are organising to get bigger and bigger and the PPP (People’s Progressive Party) must know and you must be prepared. If they are not prepared to give us a clean voters list, we must do everything to ensure there is no election with the dirty list,” Opposition Leader Aubrey Norton said, adding that “we need to prevent them from rigging the next election.”

He also said the struggle for a clean voters list would be linked to the removal of Retired Justice Claudette Singh as Chairman of the Guyana Elections Commission because she has been voting consistently with the PPP election commissioners to make decisions.

Mr Norton sought to convince supporters that the coalition would win the next general elections if the names of deceased persons and migrants are removed. The High Court has long ruled that the National Database of Registrants cannot be amended or replaced from new house-to-house registration. The names of persons are removed based on claims and objections and the General Register’s Office providing the names of deceased persons to the Elections Commission.

Seemingly impressed by the turnout at the rally—the first since Mr Norton became the leader of the People’s National Congress Reform (PNCR) and emerged as Opposition Leader—he said the opposition would intensify its mobilisation. Under the David Granger leadership, the PNCR and APNU+AFC had slipped into dormancy. 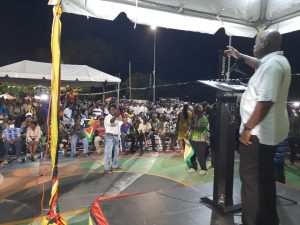 WPA Executive Member, Dr David Hinds encouraged attendees to follow-up on the pledge by Golden Grove, East Coast Demerara residents to continue protesting the police shooting death of Quindon Bacchus and other grievances as part of moves to take the “struggle to another level” for economic and political power.  “Tonight, I want you to make that pledge. We (are) not coming off the road,” he said. He hinted at stern resistance should the police attempt to break up peaceful protests. “Violence comes from the police. It is they that we have to tell about peaceful protest because they’re not peaceful. We say to them that we are not a violent people but we are not cowards, we are not a violent people but we are not going to be fearful from tonight,” he said.

Priorities for the coalition and the WPA are rising food prices, which he labelled “economic violence”, police brutality, discrimination in the allocation of oil money. “We are going to be at the table for our share of the oil money,” said Dr Hinds as he urged supporters to put their fists into the air as a sign of Black Power, Brown Power and People’s Power as he invoked the historic WPA slogan “People’s Power, No Dictator”.

Opposition Leader Norton said plans now included “going back to the village to mobilise more people” as part of a plan to secure electoral victory. General and regional elections are constitutionally due in 2025.

The Caribbean Court of Justice (CCJ) will in the coming weeks decide whether an APNU+AFC election petition could be heard in Guyana’s courts although the High Court has thrown it out for failing to reach certain timelines.

Previous: “I do not shake hands with my oppressors” – Norton
Next: Three porters pinned to death in Kuru Kururu accident