“I do not shake hands with my oppressors” – Norton 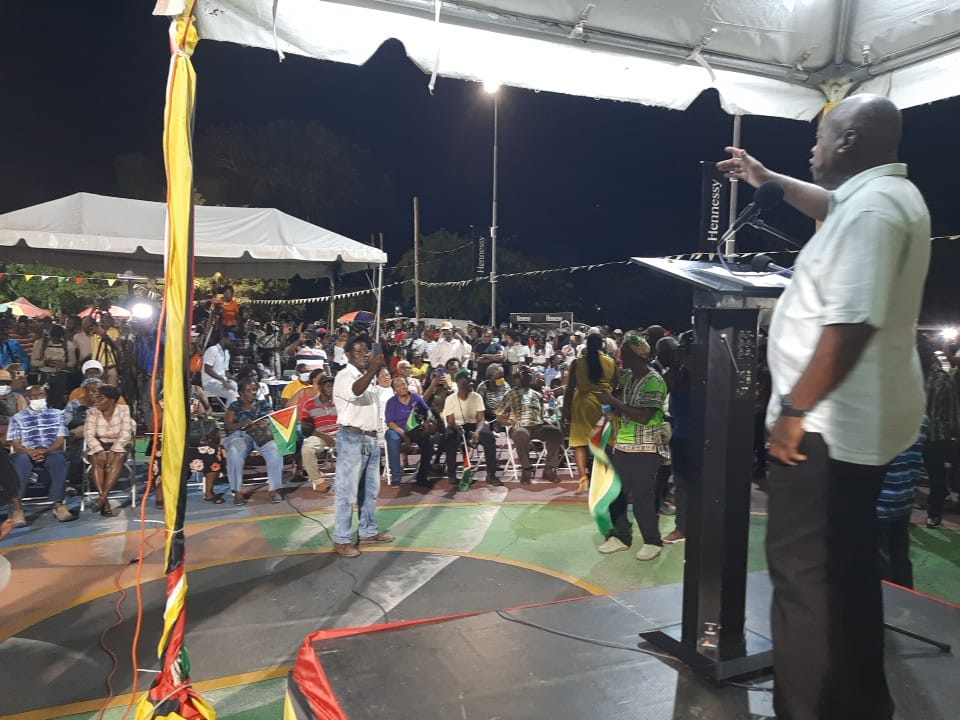 A day after he ignored Dr Ali’s outstretched hand at the Emancipation Day celebration in New Amsterdam, Mr Norton defended his decision. “I want people to know that I shake hands but I do not shake hands with my oppressors,” Mr Norton told an estimated 3,000 persons who attended a rally at Burnham Court, Parade Ground, Middle Street, Georgetown.

Many of the attendees went with their own vehicles while others travelled aboard at least 20 buses including three 30-seaters from Linden, Berbice and East Coast Demerara.

Buoyed by the turnout, he expressed confidence that the coalition of A Partnership for National Unity+Alliance For Change (APNU+AFC) could “beat” the incumbent People’s Progressive Party Civic (PPPC) if there is a “clean” voters list and an independent seven-member Guyana Elections Commission (GECOM) that excludes its Chairman, Retired Justice Claudette Singh whom he said has been consistently voting with PPP commissioners to make decisions.

Mr. Norton hinged his handshake to the government treating all Guyanese equally. In that regard, he called on the residents of Mocha, East Bank Demerara to “come out and stand with our people because they live there, it is the land for them and we shall not be moved”. He accused the government of seeking seeking to deprive residents of land at Kuru-Kuru, Soesdyke-Linden Highway; Fyrish Village, Corentyne and Rockstone, Linden and give to its friends and family. “I’m going to Linden; we are going to mobilise against them. We have a right, like any other Guyanese, to land in this country,” he said.

The Opposition Leader accused the Ali administration of political and ethnic discrimination against communities, persons and elected bodies such as town councils in Georgetown, Linden, New Amsterdam and Bartica. “Those are the four Councils we won. You know what this government does? It starves all four of them of resources,” he said, adding that the pro-PPP neighbourhood democratic councils get sufficient money while those that do not are starved.

Deeming the President “a hypocrite”, he accused the government of discriminating in the distribution 0f the COVID-19 cash grants, dispensing justice in a biased manner and withdrawing financial support to two bands in Linden and New Amsterdam. He said the “biggest obstacle” to national unity was the PPP. “Your hands are dirty! Your hands they have on them discrimination against us. Your hands have on them the protection of people who are killing people extrajudicially. For what reason must I touch hands? I will not,” he said.

President Ali has said that he is willing to talk with anyone on any subject and that the refusal to shake hands was disrespectful and did not set a good example to young people.

Mr Norton also took issue with President Ali’s criticism of US Congressman Hakeem Jeffries’ refusal to meet with him. The Leader of the Opposition said he and his supporters “stand in solidarity” with that American lawmaker who has been exposing their corruption and racism. “I want this gathering here to know we stand in solidarity with Hakeem Jeffries. He is supporting a just cause,” Mr Norton said.

Previous: Ali ready to talk , Norton says “working together” depends on “getting what we deserve”
Next: No clean voters list, no election – Norton