Ali ready to talk , Norton says “working together” depends on “getting what we deserve” 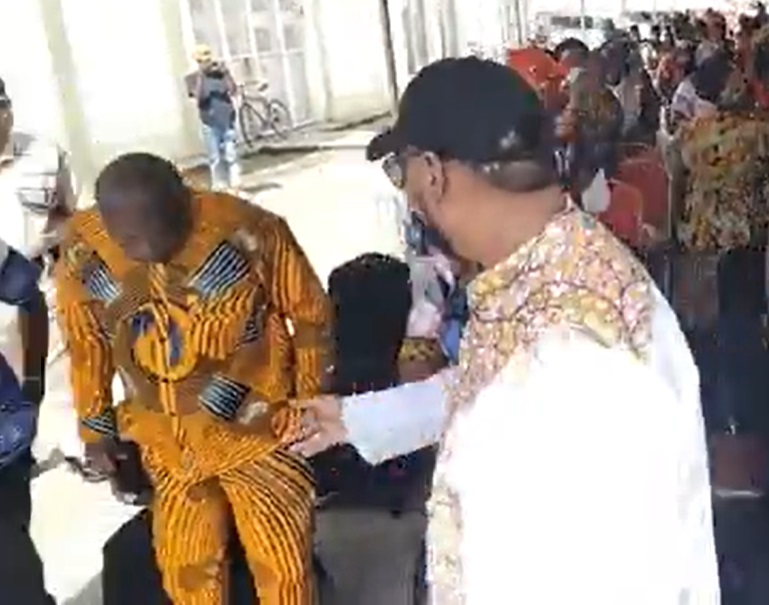 President Irfaan Ali on Sunday pledged his readiness to talk with any Guyanese to discuss their concerns but cautioned that he would not wait indefinitely,  even as Opposition Leader Aubrey Norton ruled out talks with the government unless there is evident equitable distribution of wealth.

Alluding to the United States government citing the need for inclusiveness during Dr Ali’s week-long meeting with the State Department and other US government political and other decision-makers, Mr Norton said he would only speak with the government on condition that government is making a genuine effort to address concerns. “I want to reassure everyone;  once there is inclusiveness and we are getting what we deserve then the basis will be created for cordial relationship with the government but, as it stands, we are not satisfied we are there. We are going to work to get there and  whenever we get there, we’ll be happy to work together,” he said at the New Amsterdam Emancipation celebration.

Saying that policies should be guided by equity that would ensure that the less resourced persons. “There has to be a policy to give the most dispossessed people the resources so they can develop,” he said.  He repeated his call for the government to give the Town Councils of New Amsterdam, Linden and Georgetown to allow them to develop. “Then is when we start to speak about serious development,” he added.

Moments earlier, Mr Norton and members of his delegation refused to shake the Guyanese leader’s hand at an Emancipation Day activity in New Amsterdam. In his address, the Opposition Leader acknowledged the presence of President Ali and his ministers among others.  Mr Norton acknowledged that “Guyana has to be for all Guyanese.” He called on the government to return the funds to the COFONA Band because that “will be signal  of One Guyana”. “I believe that all Guyanese must be treated equally. I believe that there is a place for music, there’s a place for culture and if you’re committed to music, culture and young people, the responsibility devolves on you to support them,” he said.

Dr Ali credited the role and contribution of Afro-Guyanese to, among other areas, health, public service, law, education and security. Citing himself, he said Afro-Guyanese also helped to mould him into who he is today. “I’m humbled by the many African brothers and sisters who shaped my life, who helped in shaping who I am today; humbled and honoured by the sacrifice that they made,” he said. “Yes, I am a Guyanese. Yes, many people may view that I am an Indo-Guyanese from a narrow window but I am an Indo-Guyanese. I am a Guyanese that has been shaped by many African Guyanese who have helped me and helped me strongly to where I am and this is not my story alone. This is a story of every single one of you,” he said.

In clear reference to Opposition Leader Aubrey Norton and members of his delegation refusal to shake his hand, the President in his address said he was not  ready to shake anyone’s hand. “I have a little son and I do not want that son to grow up in an immediate family- because all of us are family here. We are first and foremost the family of humanity but more importantly we are the family of One Guyana. We are the Guyanese family and I never, ever want us to lead a country in which my little son must grow up or your little children must grow up ashamed and afraid to shake each other’s hands. That is disgusting and disrespectful and must never ever get seed to grow up in this country,” he said.

Though Mr Norton explained that he had already informed organisers that he would leave shortly after his address, the President suggested that there could be none “when one partner in a conversation rushes out of a room after making statements.” “That is not a conversation. That is a misguided pathway of a narrative that is not based on finding the truth and finding the solutions,” he added.

Dr. Ali said he  was always willing to talk with anyone about any issue no matter how uncomfortable, but at the same time he would not wait indefinitely on anyone. “I can sit in any room and listen to any message whether the message is aimed negatively or positively , I will listen because I believe that we can only succeed if we are together , if we are One Guyana, if we uplift each other, if we support each other,” he said. “The door is wide open but I would not stand by the door and wait for those who do not want to come,” he said.

The President’s repeated emphasis on being willing to speak with anyone came less than one day after Attorney-at-Law Nigel Hughes rejected Dr Ali’s previous posture of being unwilling to speak with the Opposition, aside from constitutionally required consultations, unless the opposition A Partnership for National Unity+Alliance For Change recognised his government as having been legitimately elected at the March 2020 general and regional elections. Mr. Hughes said there was need to force a conversation on discussing the equitable distribution of Guyana’s oil wealth.

Mr Hughes said that after more than 50 years of independence from Britain, Guyana  was more racially divided and African Guyanese remained marginalised. “We have learnt now that democracy does not give you equality. There is no relationship in this country between democracy and equality so a lot of people keep a lot of noise about democracy but they are exceedingly silent about equality,” he said.

After the President’s address, he was warmly greeted by many attendees at the the event.

2022-08-01
Denis Chabrol
Previous: Time to force conversation on the distribution of Guyana’s oil wealth- Hughes, Hinds
Next: “I do not shake hands with my oppressors” – Norton