Time to force conversation on the distribution of Guyana’s oil wealth- Hughes, Hinds 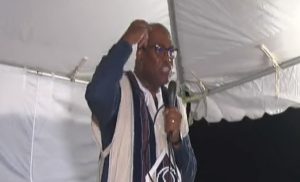 African Guyanese were Sunday night- Emancipation Day Eve- urged to agitate for a national conversation on the distribution of Guyana’s oil wealth.

Mr Hughes recommended that an analysis be conducted to ascertain how much African Guyanese communities have been deprived of so far so that they could recoup those and plan on getting a steady equally allocated stream in the future. “Your leaders have to do that. I am not a politician but your leaders have to advocate that every single community in this country gets a fair share. You cannot not have equality and automatically expect peace. Can’t happen!,” he said. He objected to the distribution of cash grants, some amounting to $250,000, because others before did not do so. “That’s the highest level of disrespect,” he added.

Pointing out that Guyana has already poorly managed traditional sectors – rice, sugar, bauxite and gold- which are all larger resources than the entire Caribbean, Mr Hughes accused the People’s Progressive Party Civic (PPPC) administration of not distributing the new-found oil wealth equally. He said a national conversation must not be hinged on the refusal of the opposition A Partnership for National Unity+Alliance For Change (APNU+AFC) to recognise the Irfaan Ali-led government.  “I’m not interested in whether or not I recognise you. This Republic belongs to every single citizen of this country and if you’re going to say you’re not talking to the leadership of the African community which is the second oldest community in this country because you say they ain’t recognise you, then it’s going to be a new day. We will impose conversation on you,” said Mr Hughes, a former Chairman of the Alliance For Change (AFC). 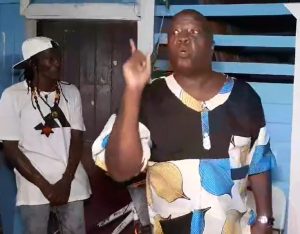 Dr. Hinds said Afro-Guyanese descendants and ancestors have been owed “back pay” for the role played in developing Guyana, and he said they must get their rightful share at all cost. “The oil money that is flowing in this country. We will get our own.  We will get our own. We gonna get our own because we gonna fight for it and if they don’t give us it, if they don’t bring us to the table, we will knock the hole out of the table,” he said.

He paid credit to United States-based village elder, Eusi Kwayana,97,  for his contribution to the development of Buxton.

Mr. Hughes said last week’s visit by President Irfaan Ali, Vice President Bharrat Jagdeo, Foreign Minister Hugh Todd and Foreign Secretary Hugh Todd to Washington DC last week for talks with Secretary of State Antony Blinken was due to the political situation in Guyana. “The American government has realised that Guyana is in a precarious place. That’s why they were summoned those that went up to speak with them because what we knew for a long time which is the inadequate allocation of resources has now reached a precarious and dangerous state,” he said.

Mr. Hughes, at the same time, cautioned Guyanese that the US was acting in its own interest. “Don’t get too distracted by the United States. It’s not because they love us but is because they recognise that the amount of wealth that is in this country, they cannot afford to have it disturbed and they realise how precariously perched this country is,” said Mr Hughes whose law firm serves the oil and gas sector.

Mr Jagdeo on Sunday night dismissed reports that the visit to the US had anything to do with opposition APNU+AFC claims of discrimination against Afro-Guyanese but more about forging closer US-Guyana relations to deal with Venezuela’s border claim to the Essequibo Region, US energy security, climate change and management of the oil wealth.

With Guyana now having three shorebases, Mr Hughes said none of them was owned by Afro-Guyanese or by a company that was classified as African. He charged that it was hypocritical to speak out against other countries seeking to dominate Guyana’s oil and gas sector and so displace local content without addressing disparities within the country. “If you want to talk about local content because you want Guyanese to benefit from oil, then you have to talk about internally equal content for every community in the country. Every community must participate. We cannot be hypocrites and say to Trinidad and America- ‘Guyana first’ and then when you come domestically, you are separating your citizenry and giving those that support you and giving everybody else nothing,” he said.

Mr Blinken and Ms Harris have cited the need for inclusionary growth, transparency and economic development for all Guyanese.

He also called on the African Guyanese community to change their attitude towards generational wealth by seeking to claim small fractions of family properties that could not be used as collateral to access financing from banks. Mr. Hughes indicated that the Financial Institutions Act should be amended to allow persons with bankable ideas to access loans rather than merely tangible collateral. “We rich now so we need to be able to ensure that the young African boys and girls don’t need to have or their parents have money but on the strength of their ideas and the strength of their business plans, they must be able to go to a financial institution or go to a junior stock market without property and raise money so that they could develop businesses and cause them to grow,” he said.

Also lamented was the absence of pro-Black medium that disseminates information and propaganda, leaving them at the mercy of other media that depict them as negative.

2022-08-01
Denis Chabrol
Previous: Jagdeo says talks with US focussed on strengthening relations, not “patently false” opposition claims
Next: Ali ready to talk , Norton says “working together” depends on “getting what we deserve”