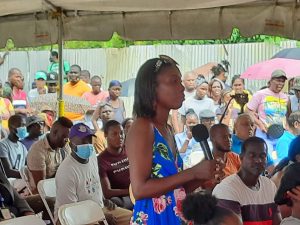 Guyanese small business owners will soon be able to offer their products to Guyanese and foreigners at the Cheddi Jagan International Airport (CJIA), Timehri where a modern kiosk will be constructed, in response to concerns by at least one local wine producer.

Abigail John, who is associated with AJ Wines and GT Wine, recalled that her product has made a “meaningful impact” at the recently-held Agro-Fest. However, she said she has made strenuous unsuccessful efforts to showcase her products at the CJIA. “One of the things people would ask me is why is this wine not at the airport. I have made several attempts. I have driven up to the airport to speak with the persons in charge there and it’s always somebody is always in a meeting,” she said.

The entrepreneur argued that “you cannot develop Guyana with craft alone.”

Minister of Tourism, Industry and Commerce, Oneidge Walrond told a ministerial outreach at Buxton, East Coast Demerara on Monday that steps are being taken to provide space at the airport in keeping with President Irfaan Ali’s “vision”. 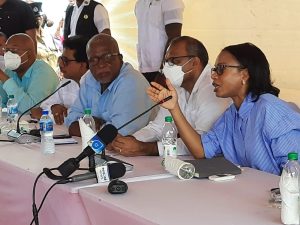 “At the airport, when it is completed, we will have a place for Guyanese- owned businesses, like how we did the expo at the oil and gas. We are going to have a similar arrangement. All Guyanese products will have a place to be there to be displayed at the airport permanently, selling all of your stuff; craft, wine everything,” the minister said.  The Minister apologised to Ms John for the “running around” she has been experiencing but noted that her wines were being purchased by government for distribution.

Minister of Public Works, Juan Edghill said one of the reasons the CJIA is being expanded by China Harbour Engineering Corporation (CHEC) to facilitate at least 20 concession areas

“There is not enough space currently for concession areas and that is the problem, so, we are expanding the super structure which is the agreement we had with China Harbour so we will be able to put in more concessions.”

He noted that although concessions at the airport are “quite pricy” but the concession areas would be able to accommodate small businesses.