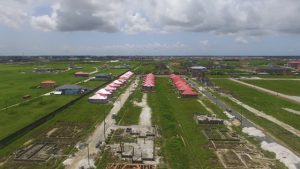 More former sugar estate lands are being made available for housing, even as government grapples to cope with a backlog of about 80,000 applications, according to Housing Minister Colin Croal.

“We are currently finalising lands because we have to do this in conjunction with Guyana Lands and Surveys Commission as well as GUYSUCO (Guyana Sugar Corporation)…We have thousands of acres of lands that will be available for future allocation on the East Coast,” he said.

Mr Croal said the lands would be distributed from August, 2022.

He was speaking on Monday during a ministerial outreach to Buxton where residents sought help with the processing of house-lot applications dating back to several years and now totaling 83,000 , up from 70,000 in August, 2020. At the same time, Mr Croal boasted that government has allocated more than 2,600 house lots to persons in the East Coast Demerara villages of Bladen Hall, Strathspey, Vigilance and La Reconnaissance.

The Housing Minister appealed for patience as all pending house lot applications “will be dealt with.”

According to Mr Croal, job opportunities are being made available for residents of Buxton and other East Coast Demerara villages when lands are being distributed.

He referred to job creation through the construction of a hub for industrial and commercial activities in the Buxton-Foulis Neighbourhood Council areas.