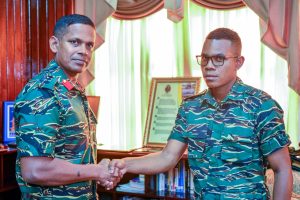 Chief-of-Staff (ag) Colonel Omar Khan, earlier Monday met with the soldier whose photograph has been making rounds on social media because of his heroic yet instinctive act of rescuing a young baby after the boat he, the child’s mother and other passengers were travelling in, started to take in water in the Essequibo River on Saturday last.

Mr. Garraway, who is also a father to a one-year-old boy, explained that he was forced to move to the boat’s bow as it moved toward the trees where they were able to wait until they were rescued.

The GDF said Lance Corporal Garraway quickly assessed the situation and recognized that the very young baby would be most at risk. As a result, he disembarked and sought to provide safety and care for the infant. “ I know I had to help the baby, as, with any emergency, babies and young children are a priority. So Mr Ignatius [another passenger] took the baby first as the mother cried out for help. I told him I would go into the tree so I could be comfortable to hold the baby properly. I then collected him while his mother got help from others with her other child,” he was quoted as saying in a GDF statement. He noted that even though it is instinctive to render assistance in times of tragedy, it took courage to remain calm and offer selfless service.

Lance Corporal Garraway, who hails from Zorg, Essequibo Coast only recently celebrated his 5th Anniversary of service to Guyana.

The 23- year -old is grateful that he was able to render assistance and most of all, that there were no casualties.

Colonel Khan noted that Mr. Garraway represented the Force well, both in and out of uniform. Further, he was encouraged to share his experience with his fellow colleagues and friends so that they can respond in like manner when the situation necessitates, the GDF added.