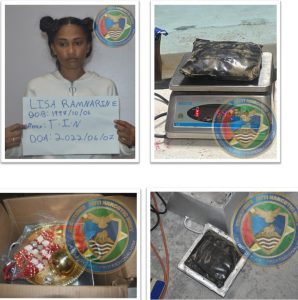 A woman has been arrested in connection with the alleged discovery of 540 grammes of cocaine in a parcel containing a Hindu havan kund.

The estimated street value is about US$2,500 to US$2,700 but the head of the Customs Anti-Narcotics Unit (CANU) said it would be worth more in the United Kingdom.

CANU said the narcotic was in the parcel with other religious items, at DHL Headquarters on Fifth Street, Albertown, Georgetown.

The anti-drug agency said its agrnts discovered the drug hidden compartment within the kund.

“Further examinations determined that a substance suspected to be cocaine was concealed within the religious item. The sender’s information retrieved from the package led to the arrest of a female,” CANU said.