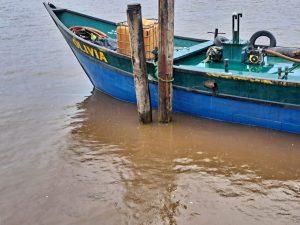 The fuel boat in whose fuel tank the body of the boat captain was found.

The body of a boat captain has been found in a fuel tank aboard the vessel he was in charge of, the Guyana Police Force said.

Police were informed that two sailors found Hopkinson’s body in the fuel tank at about 8 O’clock Monday morning.

At the time, the boat had been moored at Shurland’s Fuel Depot at Adventure, Essequibo Coast.

He was employed by a businessman who operates the fuel depot.

The sailors reportedly informed investigators that they and Hopkinson left Bartica and went to Adventure to collect fuel for their employer.

According to the sailors, they arrived at Adventure at about 5:30 AM and claimed that they both went into the boat’s cabin to rest since they had to wait for the boat to be loaded.

The sailors said they left the now dead man on the boat’s deck.  The men further related to detectives that about 8:00 AM they awoke and noticed that Hopkinson was not around and they made checks around the boat.

One of the men said he discovered Hopkinson’s body in a fuel tank on the boat.