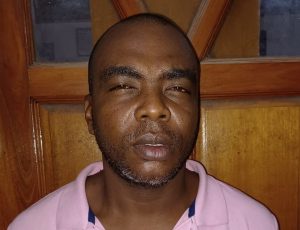 Clarence Farley shortly after he was arrested.

The prime suspect in the killing of his wife at their Crane Village, West Coast Demerara home was Thursday night arrested at a hotel in Corriverton, Berbice, the Guyana Police Force said.

He was wanted in connection with the killing of his wife, Omega Ault, who was a teacher.

Mr. Farley, who is a mechanic, was reportedly contacted in room 9 at the Malinmar Hotel where he was told of the allegation and was arrested. He was escorted to the Springlands Police Station where he was placed in custody.

Her decomposing body was found at her residence and Farley’s car  was found parked in a lumber yard at Coverden, East Bank Demerara.

The Guyana Police Force said Ms Ault’s body was discovered by her brother after he failed to reach her for at least four days. He went to her home and

Enquiries disclosed that the deceased woman was living with her husband Clarence Farley called Junior, Male Mixed Race (age unknown) of the said address, and their three-year-old son, but they were encountering ‘problems’ in their marriage.

During that four-day period also, police were told that Farley took their three-year old son to his sister-in-law,  Tracy Ault, who resides in Diamond, East Bank Demerara and told her that he is going to the backdam.