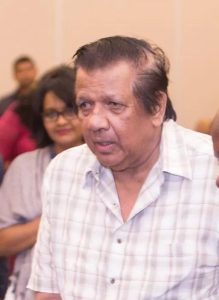 The Board of Directors, Management and Staff of the Georgetown Public Hospital Corporation (GPHC) join the medical fraternity in extending deepest condolences to the family, friends and loved ones of Dr. Ramsundar Doobay who regrettably passed on May 29, 2022.

Dr. Doobay was an esteemed practitioner who served the GPHC for almost fifty (50) years, making indelible contributions to medical practice during his tenure – his passing is a grave loss for our nation.

In 1968, a young Dr. Doobay begun his career at the GPHC as a medical intern. “Doobs” as he was affectionately called, quickly became a household name as he treated patients, taught and mentored young practitioners and contributed to the development of medical protocols and polices in Guyana.

Over the years, his alacrity and brilliance would see him ascend to the Head of Internal Medicine and acting Director of Medical and Professional Services before moving on in 2016, but it was Dr. Doobay’s humility and inimitable sense of humor that etched a lasting impression in the hearts and minds of those who had the honour of meeting and working with him.

As we grieve this loss of a medical stalwart, the GPHC reflects on the immeasurable impact Dr. Ramsundar Doobay made to countless lives including his patients and colleagues among whom he continued to be respected and greatly loved. Guyana’s medical fraternity, including some of its most remarkable practitioners can be credited to the teaching, guidance and legacy of Dr. Ramsundar Doobay – we have lost one of our very best.

Our thoughts and prayers go out to Dr. Doobay’s family, friends and loved ones at this very difficult time.

Statement by the Ministry of Health on the passing of Dr. Ramsundar Doobay

One of the indelible images in many persons’ memory of GPHC is walking into the medicine wards and seeing a simple, unassuming man finding a corner of a patient’s bed to tuck himself in, sitting, talking to the patient, assuring the patient and teaching doctors. Dr. Ramsundar Doobay was a fixture at the GPHC for more than fifty years. After today, that image will always only be our memory. GPHC will never be the same with Dr. Doobay no longer among us.

The Minister of Health and the Ministry of Health today received the devastating news that Guyana has lost one of its finest and most dedicated medical professionals. The news that Dr. Ramsundar Doobay, MBBS, MRCP, has passed has been received with absolute shock and sadness. Although the Ministry has known about has battle with illness for several months now, we were still unprepared and still shocked by the news of his death.

We express our profound condolences to his family and friends and stand ready to support them in their loss. The truth is that the loss of Dr. Ramsundar Doobay is a loss for Guyana and all Guyanese. As we grieve and mourn his death, we feel a sense of absolute loss.

Martin Carter once wrote asking the probing rhetorical question – WHERE ARE OUR HEROES? Our heroes are not only the persons who live everyday in the prominence of the news. There are heroes and heroines who toil in the total absence of public attention, but are no less our heroes and heroines. Dr. Ramsundar Doobay is one of those ordinary Guyanese whose contributions make him one of those heroes that Martin Carter spoke of. The Ministry of Health believe we have lost one of the most consummate professionals that have ever served the field of medicine.

Very few persons have served the health sector with the same dedication and the same value and worth as Dr. Ramsundar Doobay. It is no understatement to say that few have served the GPHC and medicine as much as and with the contributions Dr. Doobay made.

Dr. Ramsunadr Doobay was gifted with an intellect that was the envy of many. He was brilliant. But he remained at all times a simple, humble gentleman. His sense of humor was unique. Most of his students and many patients saw a stern, serious person. But he was gentle, caring and funny. Few could tell a joke without changing their demeanor. His expressions never changed whether he was making a serious statement or making a joke. For a man who was so funny, he was also a man of few words, always cool and collective, rarely ruffled.

In his early years with poor infrastructure in the health sector, with access to little or no technology, with access to few journals, Dr. Doobay awed his local colleagues and visiting colleagues with the depth of his knowledge of medicine. He was always up to date with developments in medicine, with new medications and new scientific findings. In fact, his main activity outside of the hospital was his incessant reading of journals and documents relating to medicines. As journals began to appear online, Doobs would spend most of his spare time lost in the pages of these journals.

Doobs, as his colleagues and friends often referred to him, started his career in Guyana in the late 1960s where he joined other illustrious medicine professionals. He started his career under the illustrious Dr. Enid Denbow and quickly began to make his mark on the medicine profession and service in Guyana. Among his early colleagues would have been Dr. Roger Luncheon with whom Doobs shared a personal and strong friendship and bond. By the 1970s, he had become the Head of Department in Internal Medicine, a position he served in until he was requested to relinquish it in 2016. At various times he served as Medical Superintendent of the Public Hospital Georgetown (PHG) and acted as Director of Medical and Professional Services at the GPHC, when the PHG became a public corporation.

Dr. Doobay is one of the few medical professionals who served the public sector throughout his career, a period that spanned more than fifty years. While he did serve in the private sector at institutions such as the Balwant Singh Hospital, he never sacrificed his duty in the public sector for private practice.

Outside his service to thousands of citizens that he personally diagnosed and treated, he served our people and our country by teaching and mentoring hundreds of young doctors. He served as a professor in the School of Medicine of the University of Guyana for more than three decades. He also mentored hundreds of interns at GPHC and, when Guyana introduced post-graduate training, he was one of the pillars of the post-graduate training program. Indeed, both the internship and post-graduate internal medicine programs benefitted from indispensable contributions from Dr. Doobay. Truly, Dr. Doobay molded the career of many young and experienced doctors who today serve in medicine in Guyana and in many countries around the world.

Dr. Ramsundar Doobay played a major role in the early introduction of treatment guidelines for diabetes, hypertension, ischemic heart diseases, asthma, liver diseases, cancer, kidney diseases, lung diseases, neurological diseases and various infectious diseases, such as leptospirosis, and exposure to toxic chemicals in Guyana. The elaborate guidelines that are now available to both young and experienced doctors in various areas of medicine were initially developed with considerable contributions from Dr. Ramsundar Doobay.

Beginning in the 1970s and particularly in the beginning of the 21st century, Dr. Doobay was instrumental in the reorganization of medical clinics, medical wards and the ICU at the PHG and then the GPHC. These models are being further improved today and are the models for hospitals across the country.

We will miss Dr. Doobay, his invaluable lessons, his unique humor, his brilliance and intellect that mesmerized his students, colleagues and his patients, his clinical acumen that saved lives everyday for more than fifty years. His contributions to health and medicine in Guyana is unsurpassed and will live on as a legend in this country.

2022-05-29
Denis Chabrol
Previous: Engineer stabbed to death after intervening in a wounding incident
Next: Teacher was bludgeoned to death; husband still at large