New York-based Guyanese Attorney-at-Law, Dr. Vivian M. Williams has been admitted to practice in Guyana, saying that he planned to focus heavily on cross-border legal issues for the wider benefit of the society.

He cautioned that if those were not properly addressed, they could have “major consequences for citizens” and institutions. “More importantly, as we begin to engage more corporate actors from outside of this country, internationally and encourage foreign investment, cross-border transactions will be a significant aspect of litigation to our country and our laws,” he said in reference to Guyana’s growing economic significance.

Dr Williams- whose practice includes cross-border merger and acquisitions, intellectual property, antitrust, corporate reorganisation, crisis management, innovation and entrepreneurship, real estate and appellate advocacy- intends to bring a wealth of expertise to his practice in Guyana. “Your Honour, I believe I bring a skillset that will contribute to the strength and the ability of the Bar in this country to deal effectively with those issues,” he said.

Attorney-at-Law Williams, who is a former broadcast journalist and teacher, also said he was looking forward to learn from and help the local bar in addressing Guyana’s legal needs. The Principal of his law firm, VMW Law in New York, he has been involved in complex litigation and transactions with major financial institutions and entities in the United States during his 18 years of litigation and transactional experience. 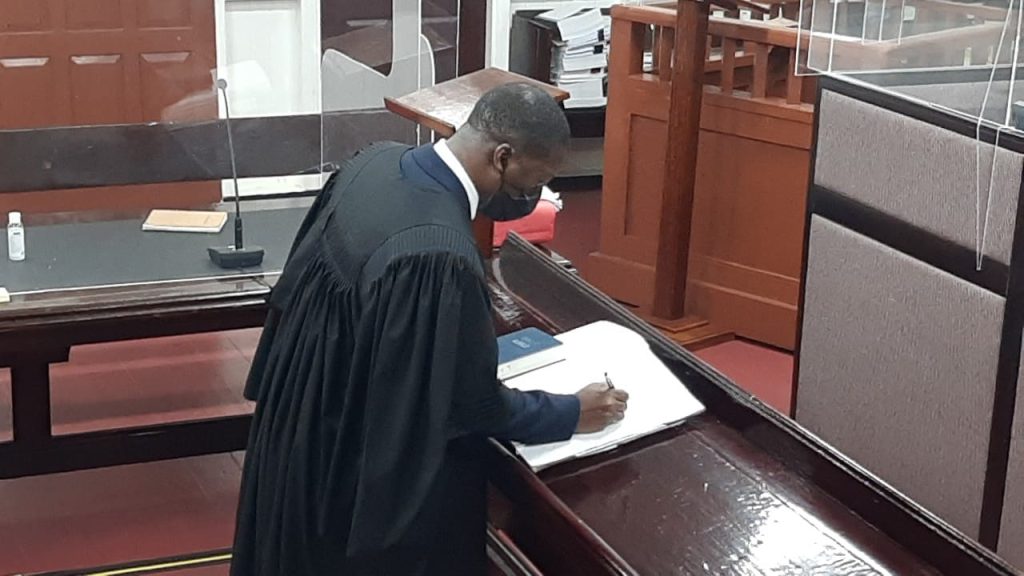 Attorney-at-Law Dr Vivian Williams signing the oath of admission as a member of the Bar of Guyana.

In contrast to past 100 years when the State played a dominant role in the socio-economic development of the populace, he said that responsibility has now been shifted to corporate entities that “have the ability to help to move Guyana forward and help to maintain cohesion.” “Corporate activities, therefore, are an important aspect of the jurisprudence of this country,”  said Dr Williams whose dissertation is titled “The Many Sides of Social Capital: How Social Capital is Related to Entrepreneurship,”

In addition to his doctorate in business administration, obtained from Baruch College, he holds a Master of Laws in Global Antitrust Law and Economics from George Mason Law School, and a Master of Laws in Intellectual Property Law from Benjamin Cardozo School of Law, Yeshiva University.

He obtained his eMBA from TRIUM Global Executive EMBA, jointly administered by NYU Stern School of Business, the London School of Economics and Political Science, and HEC Paris. He also obtained a Masters in Strategic Public Relations from the George Washington University School of Political Management.

Dr Williams was born at Glasgow, East Bank Berbice and was one of the founding journalists at Little Rock Television before moving on to work with the state-owned Guyana Broadcasting Corporation and VCT Channel 28’s Evening News.

In addition to being a youth activist, he has written directed and produced 10 plays which were staged at the National Cultural Centre.