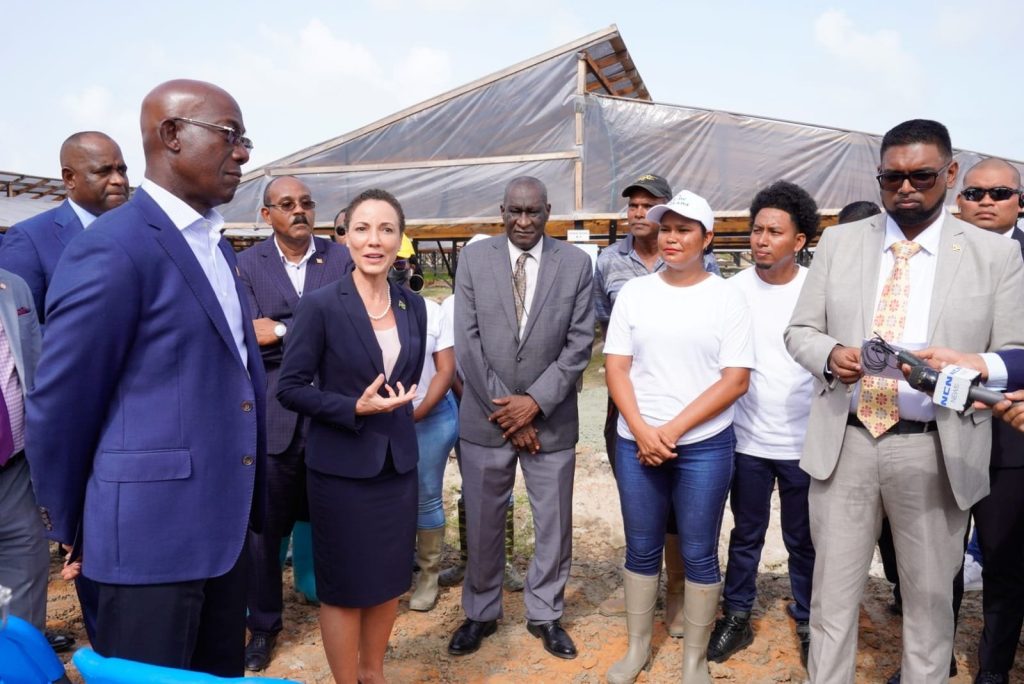 The three-day Regional Agriculture Investment Forum ended with Prime Minister of Barbados, Mia Mottley, together with St Vincent and the Grenadines Prime Minister , Dr Ralph Gonsalves and President Dr Irfaan Ali being tasked to “complete a proposal for establishing
adequate and sustainable regional transportation, after consultation with the Caribbean private sector, the international donor community and multilateral development agencies, for consideration by Heads of Government in July 2022.”

Dr Gonsalves is responsible for maritime and aviation transport in CARICOM’s quasi-Cabinet, Dr. Ali for agriculture and Ms. Mottley the single market and economy.

According to a statement issued at the end of the forum that was organised by Guyana, the regional leaders and others heads of delegation in attendance said they were “heartened by the advice of the Caribbean Development Bank that it is willing to use its best efforts to mobilise resources in this effort.”

Trinidad and Tobago’s Prime Minister Dr Keith Rowley, in his address to the opening of the forum, appealed to the international community to finance the provision of two cargo and passenger ships to CARICOM to assist with the movement of agricultural produce and passengers across the region.

The “outcome statement” said the CARICOM delegations recognised that “the lack of adequate regional transportation by sea and air is an obstacle to the transportation of food within the region, and determined that it should be overcome within the shortest possible time frame.” Guyana’s Vice President Bharrat calculates that it will cost CARICOM governments an ambitious total of US$7.5 billion to reduce the more than US$6 billion annual food import bill by 25 percent by 2025.

Trade Barriers
The CARICOM delegations to the investment forum also decided that a Special Committee, to be convened by the Prime Minister responsible for the Single Market and Economy, would immediately prepare proposals, with time-bound deadlines, for eliminating non-tariff barriers.
The proposals are to be presented at a special CARICOM summit before the end of September.

The regional leaders said the “biggest inhibitors to the development of agri-food systems within the region are trade barriers, particularly non-tariff barriers, and that this issue requires political consensus and determination to prevent it.”

That decision came one day after Mr. Jagdeo recommended strongly that there be political will by individual CARICOM leaders to not only budget funds annually for agriculture but also remove non-tariff barriers some of which have been obtained by “politically connected” retail chain stores.

The Georgetown Chamber of Commerce and Industry has been railing against Trinidad and Tobago for blocking Guyana’s meats, fruits and vegetables from entering that market.

The Heads of Government from Antigua and Barbuda, Barbados, Belize, Dominica, Guyana, Montserrat and Trinidad and Tobago and other high-level representatives from The Bahamas, Grenada, Jamaica, St. Vincent and the Grenadines, Suriname and regional and international institutions attended the summit.