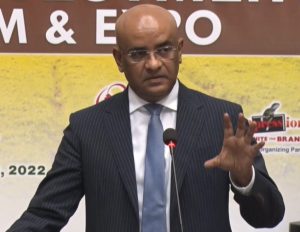 Vice President Bharrat Jagdeo on Friday called on Caribbean Community (CARICOM) heads of government to take a hands-on, direct approach to ensure their countries’ agriculture sector  gets much needed financial support and is not manipulated by “politically connected” major retail businesses.

“In many of our countries, retail trade is dominated by monopolies across the Caribbean, by a single large group that has either strong political influence or by the sheer presence in many of our territories and the period that they have been there. They have dominated retail trade and it’s hard for new people to break into the retail trade and, therefore, bring down cost,” he said.

The Vice President, who has come in for sharp criticism for his assessment of Trinidad and Tobago’s economic fortunes due to an over-reliance on oil at the expense of other sectors, said those businesses are often linked to non-tariff barriers. “To open up trade, we have to break that monopoly and it’s not going to happen easily and many of them are the ones who lobby for and they have deep connections within governments and within the regulatory agencies and they almost push the introduction of the restrictive phytosanitary standards in many of these countries as a form of a protectionist tool ,” said Mr. Jagdeo who was responsible for crafting the 2005 regional agriculture initiative.

Mr. Jagdeo on Friday described as “ridiculous” a requirement by a number of regulatory standards agencies in other countries that they have to visit ice cream factories “but they would never do that for ice cream coming from North America.” “This is all protectionist,” he added.

The Georgetown Chamber of Commerce and Industry has been complaining bitterly that Trinidad and Tobago has been using sanitary and phytosanitary standards to block Guyana’s meats, vegetables and fruits from entering that market. In response to the Chamber’s call for Guyana not to ink any accord with Trinidad and Tobago unless those non-tariff barriers are removed, Mr. Jagdeo this week suggested that a memorandum of understanding between the two Caribbean Community (CARICOM) nations could provide a “pathway” for the eventual resolution of the problem.

In his presentation on key binding constraints to agriculture growth, Mr. Jagdeo agreed that many Caribbean island nations have had to provide incentives to the tourism sector which is a major foreign currency earner and employs thousands of jobs. However, he said that was being done at the expense of the agriculture sector.

In that regard, he recommended that Caribbean Heads of Governments play a direct role in ensuring that the agriculture sector gets the required concessions and budgetary allocations for public sector investment projects such as farm-to-market roads and drainage and irrigation to support the sector. “This process has to be driven by the Heads, who are here, and in a very, very clear mandate with clear direction,” he said. With Caribbean Community (CARICOM) member states expected to increase agriculture output to the value of more than US$1.5 billion, he said the private sector would have to find US$7.5 billion to invest in the sector. CARICOM has set itself a target of reducing its more than US$6 billion annual food import bill by 25 percent by 2025.

He observed that many CARICOM member states borrow for “all sorts of things” except for agriculture but that has to change.