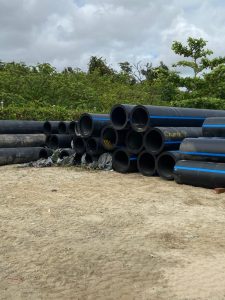 The pipes for the Shelter Belt to Water Street project.

Under constant pressure from the increasing number of heavy duty trucks during the past two years, the constantly broken more than 120-year old water mains in the vicinity of the Bank of Guyana are to be replaced under a GY$800 million dollar project,  Guyana Water Incorporated (GWI) officials said.

Executive Director of Design of Infrastructure & Water Resources, Aubrey Roberts said the remedial works would see the laying of five kilometres of pipe- two 2.5 kilometres of parallel high density polyethylene pipes to be laid parallel. He explained that that type of pipe can last as long as 300 years although the design life is 100 years. “The materials are not susceptible to erosion or corrosion, like with iron pipes,” he said.

Mr. Roberts expressed confidence in those pipes, saying that they could withstand pressure of up to 200 PSI. “These pipes are very heavy, very thick-walled and they are joined by a method called fusion welding so unlike the old network that has lead joints, these pipes may fuse where you heat up the two pipes under pressure so essentially when you are finished building, it becomes one pipe,” he told Demerara Waves 103.1 FM.

Mr. Roberts said the pipes, valves, fittings and meters have cost $450 million and labour cost would be $350 million. The invitation to bid for the project would be issued in May, 2022 and the pipe laying would last six months.

Specifically, the Executive Director of Design of Infrastructure & Water Resources expects that the busy Cenotaph roundabout would last about two weeks.

Executive Director of Operations, Jawaharlall Ramjug said the cast iron pipes have already exceeded their lifespan and so could not be easily bent or stretched or placed under pressure without breaking by large vehicles that transport oil sector related supplies. “Coupled with this oil boom, the heavy long-based machines at a higher frequency would have disturbed the area over the last two to three years more than normal,” he told Demerara Waves Online News.

Mr. Roberts added that the cast iron pipes had been connected with lead joints which over tine have become thin and the j0ints wear.

Official figures show that during last year, leaks around the Bank of Guyana- War Memorial/ Cenotaph have been fixed every three months. For the first quarter of this year, four leaks in that location have been fixed. “What happened is that there are different cracks at different locations. From the time you fix one, the weakest point closest to the area that you fixed starts to leak,” he added. Mr. Ramjug explained that the situation is complicated by a complex network of pipe linking Avenue of the Republic, Main Street and Church Street and intersecting with pipe on the road just outside the Museum.

The officials said the cast iron pipes along Church Street from Shelter Belt to Water Street, including the War Memorial/ Cenotaph roundabout, would be replaced as part of the GY$800 million project.

GWI has already purchased and stockpiled the pipes that would be laid under most of the Merriman’s Mall up to Orange Walk from where they would be diverted to either North Road or Church Street before continuing down to Water Street.

When the works reach the roundabout, the utility company said that area would be closed to vehicular traffic for at least three months.

Motorists and other road users often criticise GWI for not properly repairing the pipes at the roundabout or failing to take action as soon as a leak becomes visible, but the GWI Engineers said the leaks have to be wait several days before they could be repaired. “From the time there is a leak but I must admit, we don’t go immediately to that leak and there are reasons for that. We need the leak to mature to a certain standard before we go to the leak. If you go just as it starts sweating, you may not have a good fix,” he said.

2022-05-04
Denis Chabrol
Previous: Ali rules out use of spyware on journalists, other citizens
Next: Brazil’s President to visit Guyana on Friday