Ali rules out use of spyware on journalists, other citizens 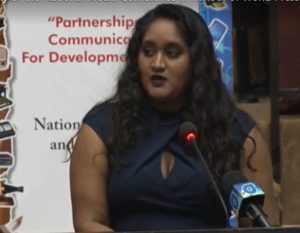 “This government has no intention whatsoever; it is not even contemplated in my mind to move in any direction to have any spyware or anything to spy on anyone. That is furthest from my thought. I have not even imagined something like that so take it out, take it out from your imagination now. It will never happen at least under this government,” he told a Guyana-government 0rganised two-day forum to mark World Press Freedom Day being held under the theme “Journalism Under Digital Siege.”

He also remarked that wherever spyware is being used against journalists, it “should be rooted out because no government should by spying on their population not in the democratic construct of a free society.” 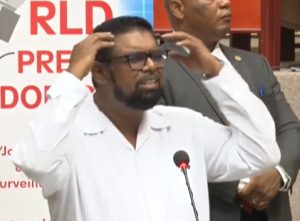 President Irfaan Ali: “it is not even contemplated in my mind to move in any direction to have any spyware”

Dating back to colonial times, the Guyana Police Force has a Special Branch department that monitors and infiltrates political parties, the media, trade unions and other non-governmental organisations. The Guyana Defence Force’s intelligence department also performs similar functions. The Interception of Communication Act, which was approved in 2008, authorises the State to eavesdrop on suspects through a court order, and since then a sophisticated system has been constructed in the Castellani House compound to perform that function as part of a national intelligence network.

In her remarks to the two-day forum at which the President and other government officials spoke about “responsible” journalism, GPA President Nazima Raghubir publicly called on Dr. Ali to assure journalists that they were not being targeted by spyware. “Given the fact that the President will be speaking after me, it will be important for us to hear directly whether the government is in possession of any spyware and plans to acquire and use it especially on journalists,” she said.

In Trinidad and Tobago, under pressure from the opposition United National Congress (UNC), the State security has admitted to being in possession of components of spyware but has said they have not been used.  Both police and the government had denied that they are in possession of the Pegasus spyware that can reportedly intercept calls and messages from platforms such as WhatsApp.