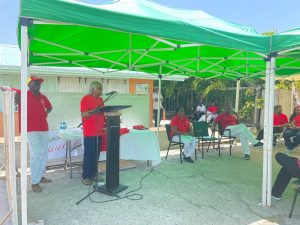 Chartered Accountant Christopher Ram on Sunday- Labour Day – joined the Guyana Trades Union Congress (GTUC) in criticising the bankrupt National Insurance Scheme (NIS) and recommended that some of the oil revenue be used to bail out that social security agency even as it considers investing in the lucrative housing market.

“Let us take some of this money that we have from oil. Let us make and capitalise the National Insurance Scheme so that no worker must ever have to worry whether or not their pension, their sickness benefit or whatever else benefit is secured,” Mr. Ram said in brief remarks. With the 2021 actuarial review due, he said now was the time to put that option and he or she should be asked to state specifically how much it would cost to recapitalise the NIS and so “take it out of the dangerous situation it currently faces.”

A Partnership for National Unity+Alliance For Change (APNU+AFC) Shadow Finance Minister, Volda Lawrence recommended that government takes 1 percent of current oil revenues to bail out the NIS. Reacting to claims by Mr. Jagdeo that the NIS had become bankrupt due to the then coalition government’s closure of several sugar estates and the retrenchment of 7,000 sugar workers along with additional joblessness of 35,000 other persons, Ms. Lawrence had instead accused Mr. Jagdeo of contributing to the NIS’ virtual collapse by bad investment of billions of dollars in the Berbice Bridge, Colonial Life Insurance and other entities.

While Opposition Leader Aubrey Norton and all of the trade unionists, who spoke at the GTUC’s after-march rally in the Critchlow Labour College (CLC) compound pummelled the People’s Progressive Party Civic (PPPC) for mismanaging the NIS, none of them provided figures to challenge Vice President Bharrat Jagdeo’s position that the investment of GY$2.5 billion in the Berbice River Bridge Company has so far yielded GY$3.3 billion. “It is the highest yielding investment that yields more than the Treasury Bill ,” Mr. Jagdeo had said.

Speaking at the rally, Mr. Norton said categorically that, “the People’s Progressive Party bankrupt NIS” among several “failed projects” that results in the wastage of money through corruption and incompetence. 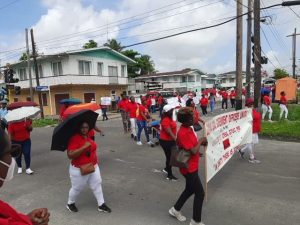 Mr. Ram recommended that the NIS be secured through “creative means” such as adopting the Trinidad and Tobago model in which a 49 percent of the mortgage finance institution is 0wned partly by the government and 51 percent by the NIS there to invest in residential and commercial housing. “That should not be beyond us,” said Mr. Ram who is also a practicing lawyer. Noting that the Guyana Revenue Authority (GRA) headquarters is owned by the NIS, he said that was evidence that that social security entity could invest in housing real estate and “lift the rate of return.”

Mr. Ram noted that the 2016 report on the NIS’ risks and premiums has not been addressed or tabled in the National Assembly by successive governments.  He said because authorities continued to delay addressing the problems by the actuaries since 2001, Guyana has problems with the pensionable age, retirement age and the contribution rate. “At the moment, the National Insurance Scheme is bankrupt. It can meet only its debts on an ongoing basis but actuarially the NIS does not have the means to meet all its obligations and we all know that ignoring a problem does not make the problem any lighter; it exacerbates the problem,” he said.