Guyana’s trade union movement on Sunday appeared even more fractured, amid calls for workers to get increased wages and salaries, a viable National Insurance Scheme and respect for collective bargaining.

The Guyana Public Service Union (GPSU), one of the government’s most strident critics, did not participate in the May Day march and rally, but participated in a Labour Day breakfast meeting hosted for top trade unionists by President Irfaan Ali at State House.

Although the Guyana Teachers Union (GTU) marched through the streets and its General Secretary, Coretta Mc Donald spoke at the GTUC-organised rally in her capacity as GTUC President, the teachers had a separate after-march function at their union hall a shirt distance away from the GTUC headquarters. “This is an indictment on some of us who profess to be trade union leaders and more so the government who is now sitting in place: When you talk about One Guyana and you encourage two trade union movement rallies. It is saying clearly to us, Comrades, that we cannot continue to trust some of the people who talk to us about unity and transparency and democracy because as far as I am concerned, these are words that they know and can play them conveniently,” she said.

She noted that the Minister of Labour Joseph Hamilton was absent. Opposition Leader Aubrey Norton and a number of People’s National Congress Reform members who are opposition coalition parliamentarians were , however, present.

The Clerical and Commercial Workers Union (CCWU), once an active affiliate of the breakaway faction of the Federation of Independent Trades Unions of Guyana (FITUG), led its contingent back to its headquarters when the march reached Woolford Avenue and Albert Street. CCWU President Sherwood Clarke sought to place a lot of value on a “united march is the best way to unite this country.” When pressed about why his union was not participating in the GTUC rally, he said his union is a member of both federations. “CCWU is a part of the GTUC and FITUG and we don’t get caught in the mud so we decided to go back to our union,” he said. Mr. Clarke recommended that the trade union strips itself of politics and represent the workers as a key pathway towards trade union unity. “The leaders need to work together…In my personal point of view, is a political agenda and we need to move away from politics when we are dealing with workers’ issues,” he said. 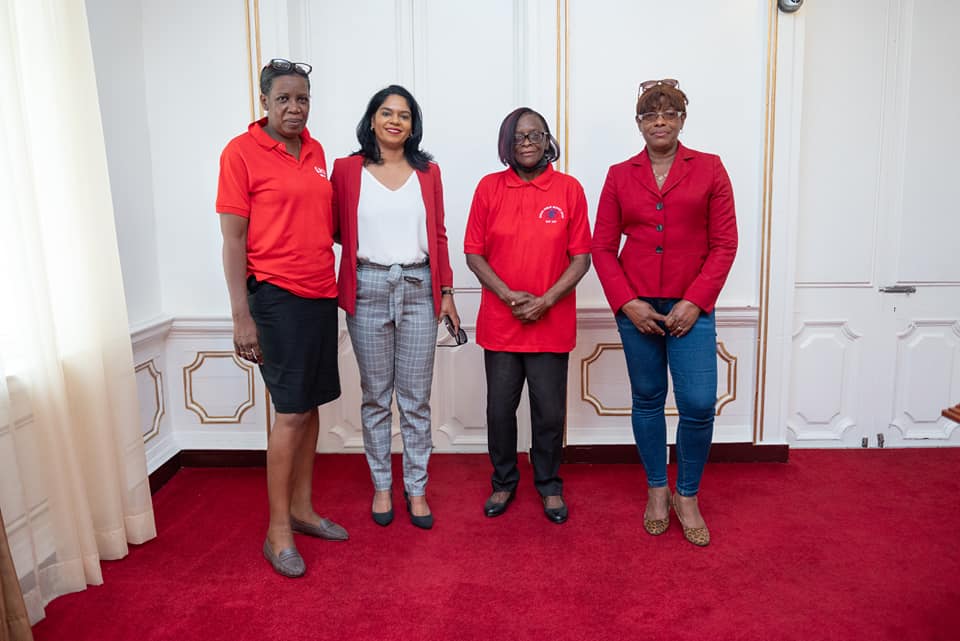 President of the General Workers Union (GWU), Norris Witter was so moved by the fragmentation of the marchers to their different union halls that he lamented passionately about the prospects of winning benefits for workers. “After that majestic walk and having assembled here, some of our comrades choose to leave for whatever reason. We cannot win a struggle that way. We are living in perilous times, we are living at a time when all the rights fought for by our predecessors, Critchlow and others, are being whittled away by a government by its own political actions that it does not embrace working class principles,” he said.

Mr Witter called on those who appeared to be satisfied with current living conditions to leave the trade union movement. “If you are not prepared to struggle and to make the sacrifice, get out of the business, get out of the business. Yes! I am annoyed and I have every right to be annoyed,” he said, adding that the trade union movement and Guyana could not be built on pettiness, factionalism and sectarianism.

Across at the National Insurance Scheme (NIS) Ground on CARIFESTA Avenue, the breakaway FITUG held a separate rally for its affiliates- the Guyana Agricultural and General Workers Union (GAWU), National Association of Agricultural, Commercial and Industrial Employees (NAACIE) and the Guyana Labour Union (GLU).

FITUG President, Carville Duncan diagnosed that disunity in the labour movement was due to trade union leaders making decisions without involving their members. “This illusion that they are the Alpha and Omega – an end to itself, whatever they say and do, their members would accept . It is this behaviour, Mr. Chairman, that caused the polarisation of the trade union movement and, instead of making it stronger, it has become more fragmented and weaker,” said Mr. Duncan, the GLU President.  He said trade unions are weak because workers have been leaving or refusing to join because of the way those organisations are being managed, in some cases not holding internal elections and conferences. “We, as a movement, should take stock. Many trade unions have not held elections as their constitutions stipulate. Many trade unions have not held conferences and many trade union leaders are imposing their personality on their members instead of developing their unions,” he added. The FITUG President appeared uncomfortable with union leaders who at “every moment that is available criticise the government for what it has not done based on their own perceptions.”

For his part, Opposition Leader Aubrey Norton told the GTUC that he would be pushing for a broad alliance of like-minded stakeholders . “We are going to build a broad coalition of elements of civil society, the workers, businesses that believe in a bright future and that coalition will work for that future,” he said. Mr. Norton, who is also Leader of the People’s National Congress Reform (PNCR), issued a call for a “people-centered” approach rather than one only focussed on infrastructure. He also restated the need for the removal of personal income tax and a recalculation of a basket of goods to determine what is a livable wage.

FITUG is regarded as pro-People’s Progressive Party Civic while the GTUC is seen as being historically an ally of the PNCR.

From 1988 to 1993, six unions suspended their involvement in the TUC and formed the Federation of Independent Trades Unions of Guyana (FITUG) to protest longstanding political control of the TUC by the PNC. After long negotiations with the FITUG unions, the TUC adopted democratic reforms to its constitution in February 1993. The FITUG unions returned to the TUC at a special conference in September during which a FITUG member was elected president in the TUC’s first free elections since the mid-1970s.