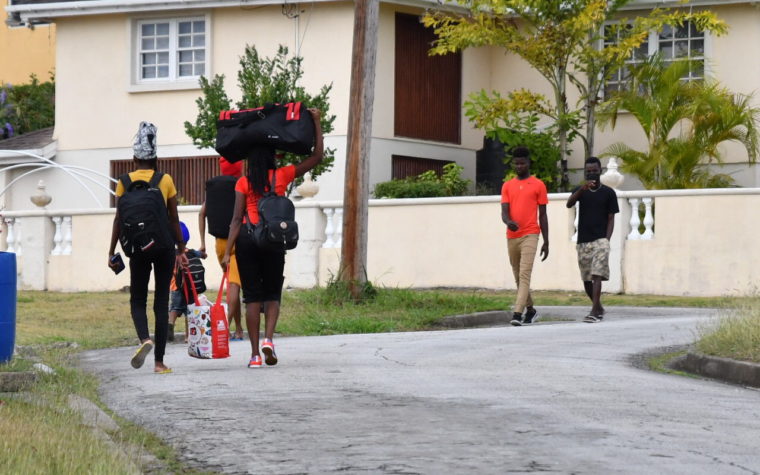 A number of the Haitians shortly after they were evicted from an apartment (Barbados Today picture).

Home Affairs Minister Robeson Benn on Friday ruled out allowing the entry into Guyana of 34 Haitians who have been stranded in Barbados since February, having paid thousands of United States dollars to an agency to come here or Brazil.

Mr. Benn said the Guyana government has determined that several of them have fake identities. “We will not (grant them visas) because their bona fides are fake and that’s simply the issue…There are ID cards for Brazil which are not legal and there are also other documents which we have seen which are fake,” he told reporters.

The Home Affairs Minister said the Guyana government was working with Barbadian authorities about some other aspects related to the movement of Haitians which have been “ongoing for a while.”

Asked whether the Barbadian authorities have provided information about the Haitians, he would only say that “i have documents and that is sufficient for our position.”

The Haitians arrived in Barbados on February 20 with the promise of being facilitated entry to Guyana or Brazil.

Over concerns about human smuggling, Guyana has banned the automatic entry of Haitians under the CARICOM regime, resulting in the need for nationals of that country to obtain visas before they arrive here. Authorities in Georgetown had suspected that the Haitians had been victims of smuggling to French Guiana and Brazil as official records show they most of them had arrived here legally but had not remained here.

Barbados Today earlier this month reported that the Haitians, including a pregnant woman and children, have all been evicted from a house.in suburban Barbados.

They had been seen walking through the streets of that Caribbean island with duffel bags and suitcases containing their personal belongings with no idea of where they would have slept.

The plight of Haitians has recently been the subject of a hearing before the Inter-American Human Rights Commission. There, activists had disclosed plans to file a case at the Caribbean Court of Justice (CCJ) to ascertain whether Guyana is violating CARICOM’s Revised Treaty of Chaguaramas by imposing visas on Haitians.

Nationals of other CARICOM member states are entitled to an automatic six-month stay on arrival.