Opposition Leader urges govt to prove it believes in Linden 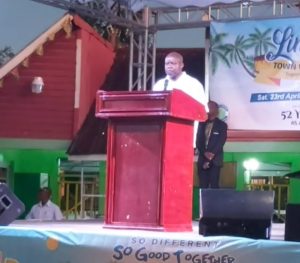 Opposition Leader Aubrey Norton on Sunday urged the incumbent People’s Progressive Party Civic (PPPC) administration to award most contracts to residents of Linden, even as he promised to open a university in that once thriving bauxite town should the coalition of A Partnership for National Unity+Alliance For Change (APNU+AFC) regain power at the next general and regional elections.

Mr. Norton, in apparent reference to the revival of football in Linden, a 52-year old town, by the  PPPC-led administration, he argued that was insufficient and that the government should cease awarding most of the contracts to entities outside the municipality. “The promotion of business matters and if you are serious about Region 10 and Linden, I say top you when contracts are given in Linden, they should be given in the main to Lindeners,” he said.  Mr. Norton said the government could not justifiably claim that it loved Linden and Region 10 while “70 percent of the contracts go out of the region.”

Addressing the gathering that included Labour Minister Joseph Hamilton, a former PNCR executive member, Mr. Norton said the Irfaan Ali-led administration could prove it “believe in” and “have an interest” in Linden and Region 10 (Upper Demerara-Upper Berbice by completing the construction of an athletics stadium, once again budget for the construction of a new Linden-to-Wismar bridge as part of the construction a Linden-to-Mabura road.

While the Opposition Leader agreed that Lindeners should be entertained, he cited the need for programmes and projects to allow Lindeners to become independent. In that regard, he promised that an APNU+AFC-led administration would establish a University of Guyana campus there. “The APNU+AFC government again will put a university in Linden. We believe that Lindeners spend too much money to go to town to get their education and so we believe that the time is nigh when Linden must get a university or at least a branch of the University of Guyana,” he said.

Meanwhile, he called on the government to put in place a reclamation programme for bauxite mined out areas so that the land could be allocated meaningfully.

Mr. Norton also pledged that if APNU+AFC coalition wins the next general and regional elections constitutionally due in 2025, “on returning to government Linden will be the top priority.”

Linden is an amalgamation of Wismar, Christianburg and Mackenzie under the PNC-led administration of then President Linden Forbes Sampson Burnham. Linden and the wider Region 10 are considered a traditional stronghold of the mainly Afro-Guyanese backed PNCR and the coalition.