PNCR Leader fires back: Van-West Charles has hidden agenda in push for meeting with PPP 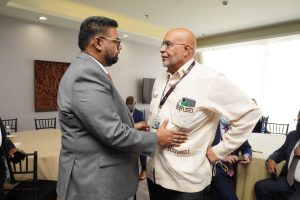 Leader of the People’s National Congress Reform (PNCR), Aubrey Norton on Tuesday lashed out at his political advisor, Dr. Richard Van-West Charles’ claims of poor communication, instead accusing him of having a hidden agenda of trying to broker talks with the incumbent People’s Progressive Party.

“Mr. Van-West Charles has been pushing for me to engage the People’s Progressive Party through him and I made it clear to him that I cannot engage the People’s Progressive Party without a decision of the Central Executive,” he told a news conference. Mr Norton said he has two messages in his phone “that can verify that that is the direction he was going,” the PNCR Leader added.

Efforts to contact Dr Van-West Charles on Tuesday were unsuccessful.

During the Guyana Energy Conference held from February 15 to 18, 2022, Dr Van-West Charles had hoped to meet with President Irfaan Ali but from all accounts that meeting had been pushed back to a later date.

Mr. Norton said Mr. Van-West Charles’ stance would be discussed at their party’s Central Executive Committee (CEC) meeting scheduled for later Tuesday, but he did not hide his displeasure. “I reject Mr Van-West Charles’ attempt to use me as a scapegoat to achieve his personal and other ends,” their party leader said.  He added that after the issue is discussed at the CEC, an official pronouncement would be made.

Responding to plans by Dr Van-West Charles to pull out as Political Adviser to the PNCR Leader over  concerns about his leader’s poor communication and lack of consultation, Mr. Norton remarked that, “all the claims, I think, are ridiculous but there is nothing I can do when people mismanage their own personal life and want to use me as a scapegoat,” Mr. Norton said.

Dr. Van-West Charles was appointed on the spot by the PNCR Leader as his political adviser in what had been regarded as a step in the right direction of forging party unity after a campaign for the leadership of their party.