A 9.6 kilogramme cocaine bust from a former media worker, minutes before she was due to board a flight to the United States (US), has led to the arrest of a former anti-narcotics agent and a serving Customs Officer, the Customs Anti-Narcotics Unit (CANU) said on Monday.

The law enforcement agency said 25-year old Zanneel Nirmala Williams of 181 Lamaha Gardens, Georgetown was arrested on April 22, 2022 at the Cheddi Jagan International Airport (CJIA) with 7.962 kilogrammes of cocaine  in her carry-on bag and 1.666 kg strapped to her body.

Williams is the niece of an elected government official and a former media worker. 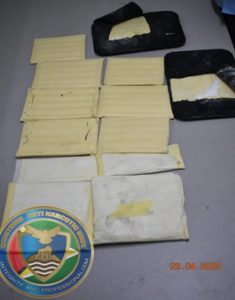 The cocaine that CANU said was seized from Zanneel Williams.