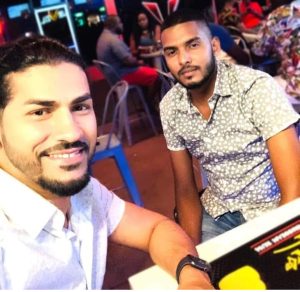 Guyana National Forensic Laboratory experts on Saturday ruled out the rock-like substances, found in a car with the bodies of two dead men on the Marriott Hotel parking lot, being narcotics but they suspect that it is sodium cyanide which is lethal in small quantities.

The Guyana Police Force said it could not test for sodium cyanide and so the samples of the whitish hard substance, which were found in a plastic container on the back seat of the vehicle, would be sent to an overseas laboratory for further testing.

After  60-year old woman June Teixeira called the hotel at about 11:30 Friday night and informed them that her 34-year old son, Justin Teixeira was suffering from a seizure and asked that someone check on him, Marriott Hotel staff checked on him but he was not immediately located as he was not in his room.

Police said another hotel employee was tasked with checking Teixeira’s black Vezel motorcar (#PAC 2607) that was parked in Marriott’s parking lot where he observed Teixeira sitting in the driver’s seat, and all the windows of the vehicle were half-way down.

“The employee said he opened the front passenger door and discovered Paishnarine Hansraj, a 25-year-old from Hague Backdam, West Coast Demerara, sitting in a crunch-like position. Both Teixeira and Hansraj appeared to be motionless.”

Emergency responders arrived along with police and a doctor pronounced them dead at the scene.

Investigators said no marks of violence were seen on the exposed parts of the bodies.