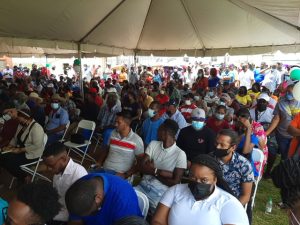 A section of the large number of farmers who attended a meeting at Onverwagt, West Coast Berbice.

President Irfaan Ali on Sunday announced that major Canadian airline, West Jet, is sending a delegation to Guyana next week to examine the possibility of transporting large quantities of produce to North America.

Addressing a large number of farmers at Onverwagt, West Coast Berbice to launch a Black Belly Sheep project, he said his delegation recently met with West Jet representatives in the United Arab Emirates (UAE) to provide “direct” produce to the US and Canada.

Dr. Ali said plans are in the pipeline to increase the production of  poultry and swamp shrimp for local, regional and eventually international supply.  ‘The market is there and we are now creating incentives to support farmers,” he said. The President noted that already the production of swamp shrimp has doubled.

He also announced that three UAE state banks, including the Emirati and Elite Groups, were interested in doing business in Guyana.

The President said soon Guyana and Barbados would be commissioning a food terminal and similar plans were being made with Antigua and Barbuda, Jamaica and St Lucia.