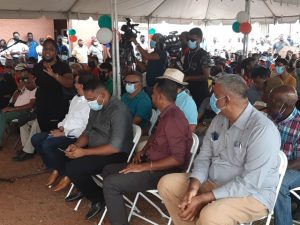 President Irfaan Ali on Sunday announced that Barbados would be supplying 1,000 Black Belly Sheep to Guyana, as part of a plan to make Region Five (Mahaica-West Berbice) the Caribbean Community’s (CARICOM) livestock capital.

In launching the Black Belly Sheep project at Onverwagt, he said “Region Five must be the livestock  capital of CARICOM.” Dr. Ali said  government would be aiming to develop a consistent system to ensure the “highest possible” output from the fields and pastures. “It’s  not only bringing the 1,000 breeding stock and leaving it there,” he said.  Over the next two years, he said production would be ramped up with the aid of large scale businesses to provide technology and market access.

He said that Barbados and Guyana have reached agreement to supply the market of that Caribbean island alone.

The President said a dedicated team would be hired to work with farmers in Region Five.

The targets, he said, are 7,900 metric tonnes annually and 4,500 jobs by the end of five years. Projections are that annual expenses will be US$30 million and yearly earnings would be US$43 million

Twenty-five thousand hectares  are needed for this US$175 millio project countrywide.

He said government was investing US$3 million in acquiring 2,000 heads of sheep.

“This is not gaffe, this is hard work, this isbreal work,” he said.